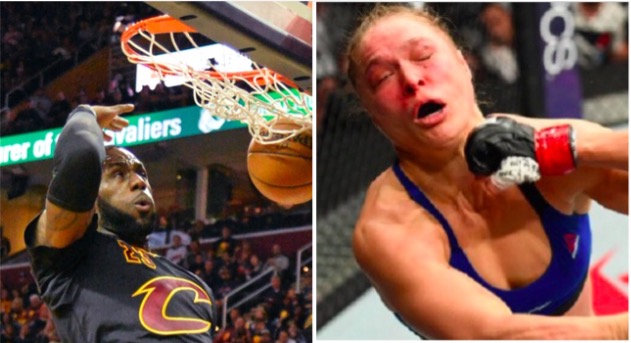 Following her shocking loss to Holly Holm at UFC 193 back in February, Ronda Rousey wallowed in a dark place. She was upfront with her post-fight depression, going so far to say, “I was literally sitting there and thinking about killing myself and that exact second I’m like ‘I’m nothing, what do I do anymore and no one gives a shit about me anymore without this.”

It took the UFC Golden Girl nearly one year to get back in the Octagon, only to get bamboozled by Amanda Nunes in less than one minute. One can only speculate about the demons Rousey is fighting in her head now, as she has gone radio silent on social media since the loss. Amanda Nunes, however, has not.

Nunes isn’t the only one to pile it on Rousey, the internet ran wild with memes and jokes and photoshops. The general public consensus is that mockery is warranted, especially for someone whose historically amassed massive financial gain and public praise for being the poster girl of UFC.

LeBron James is no stranger to the vitriol that comes with not meeting the public’s lofty standards, as his early career was marred with the belief that he didn’t have the Jordan/Kobe killer instinct to be mentioned among the all-time greats. That has changed. LeBron recently spoke to the Akron Beacon Journal comparing his experience with what Rousey must be going through right now.

“In sports, in general, they build you up as high as they can, put you on the highest mountain in the world, just to tear you down. That’s coming from somebody who has experienced it. And that’s exactly what she’s going through right now,” James told the Beacon Journal on Saturday. “That’s a fact. I know exactly how she feels because I was that athlete. I went through that.”

LeBron is right. People bask in Rousey’s failures for the same reason traffic gets backed up miles because of people slow-rolling by car crashes. Watching her world burn is oddly, albeit shamefully, entertaining. There’s beauty in the destruction.