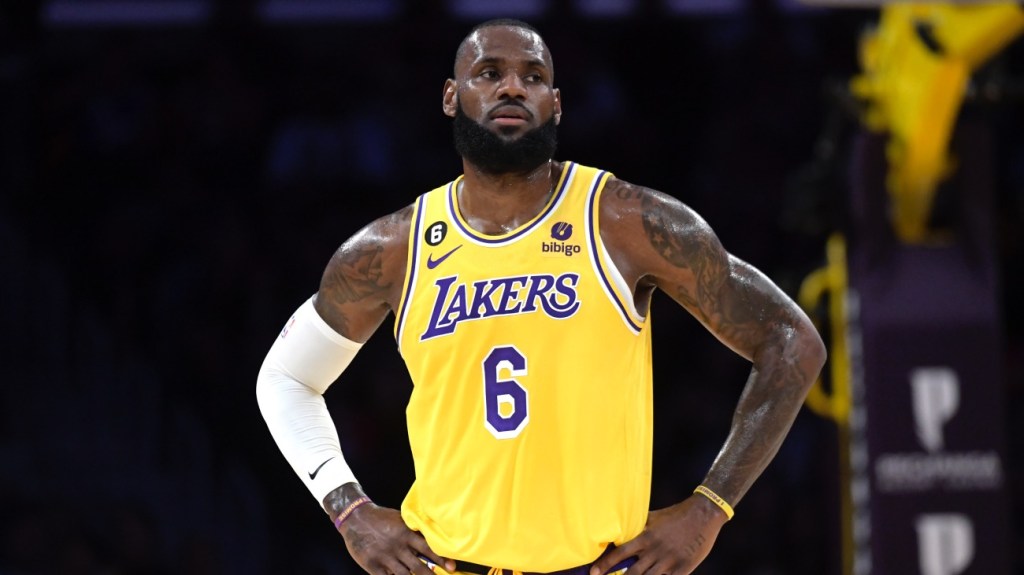 Both of these things are true: LeBron James is one of the greatest if not THE greatest NBA player in history. Also, the NBA Preseason really doesn’t matter at all.

While both of those statements can be true, it can also be very concerning that LeBron James missed every single shot in his NBA Preseason debut with the Los Angeles Lakers. The Los Angeles Lakers were BAD last season. They finished 2021-22 with a 33-49 record (.402) including just 18-34 in the Western Conference.

The Lakers organization, Lakers fans, and LeBron James certainly hope for better in the 2022-23 season but LeBron’s preseason debut was a bit ominous. In the 16 minutes LeBron was on the court, King James took 7 shots from the field and missed all 7. Lakers fans certainly let him hear it on social media afterward.

Is this the King James version of the ‘Surrender Cobra‘?

LeBron James has opened the Lakers' first preseason game shooting 0-for-6 from the field. He was clearly frustrated after missing the last shot he was fouled on, shaking his head as he looked down at the floor.

This will be his 20th year in the league!

LeBron James in the first half vs Kings:

It wasn’t just a fever dream, it really happened:

Was it the Kings’ defense doing the work or LeBron James just throwing up bricks?

Lebron James has not made a field goal in 19 minutes of NBA preseason basketball. Kings defense is stopping Mr. 27/7/7 apparently?

YIKES, this take is going a bit too far.

I swear to god Kobe is rolling over in his grave rn watching lebron play as a laker, this man is 0-7 vs the kings in the preseason. Missing layups, shooting bricks, I’ve never seen a so called 🐐 shoot and miss as many layups as this man 🤦‍♂️ let’s see how this season goes

Trade him to where? For what? No chance that’s happening:

This is absolutely appalling, LeBron James shooting 0-7? The Lakers need to trade him while they still can and build a new team around their franchise player Russell Westbrook. I suggest trading LeBron for KD, he would be the perfect number 2 to backup Russ. pic.twitter.com/9F9SGQ107Q

"It's all about time." – LeBron James comments on playing with Davis and Westbrook and his poor shooting game in the preseason opener. #Lakers pic.twitter.com/ll07iEzcw1

LeBron talks about how this is all about ‘rhythm’ and ‘conditioning’. But this is his TWENTIETH year in the league. One would think he’d be able to keep his conditioning in check during the offseason. That’s what has led to Tom Brady’s longevity and LeBron James 100% knows that.

If I was a Lakers fan, I’d be more concerned about LeBron discussing his conditioning than missing all 7 shots.