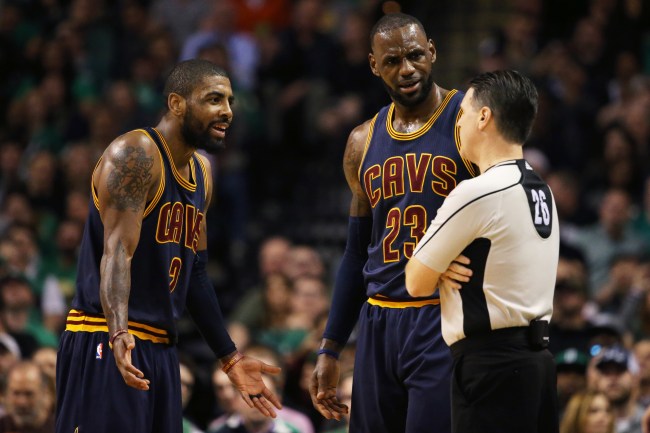 It’s hard to criticize much of anything LeBron James did during his time with the Cleveland Cavaliers from 2014-18, as the guy all but etched his face into the Mount Rushmore of NBA greats after leading his team to four-straight NBA Finals trips; which included an incredible 2016 victory after coming back from a 3-1 series deficit. But if there’s anything that can be looked at as a failure for James during that time, it was his contentious relationship with then teammate Kyrie Irving.

Like other great NBA duos of past and present, both James and Kyrie wanted to be “the man,” with each knowing damn well that they were superstars and deserved to be the primary guy. While LeBron had talked about one day handing the keys of the franchise to Irving, it wasn’t enough to appease the All-Star guard, as Kyrie Irving forced his way out of Cleveland during the 2017 offseason.

Since the split between Irving and LeBron James, things haven’t gone too smoothly for the former. While the point guard has seen some individual success (making the All-Star team in two of the past three seasons), he has yet to lead a team to the NBA Finals on his own. To be blunt, he hasn’t been a great leader, often criticizing teammates over the past couple of years, while also blowing up at the media.

Given the rocky road for Irving since his trade from Cleveland, ESPN analyst Ryan Hollins thinks LeBron James is to blame, recently saying that it was James’ “poor leadership” while he was teammates with Irving that has led the point guard to act the way he has over the past couple of years.

“LeBron can’t cast a shadow, he [Irving] has a lot of maturing to do as we all have. You gotta think these 23, 24, 25, 26-year-old guys casting a big spot so, to be honest I looked at the content and the intentions behind your heart. Who you are versus trying to stunt on somebody because you’re 25 years old and you don’t know any better. But I think the way those two butted heads kind of left a bad imprint on Kyrie. It was bad business. It was some things that LeBron did. You know, Kyrie learned some poor leadership from LeBron and some of the stuff he did and I think Kyrie tried to come into his own in a different way.”

Although Irving and LeBron James have since made up and apologized for the way they butted heads while teammates with the Cavs, it’s interesting to think about how the younger guard may have been impacted by the polarizing James. After all, LeBron had already been to five NBA Finals’ when he returned to Cleveland in 2014 (winning two), and Irving re-upped with Cleveland earlier that summer under the impression that he was going to be the face of the franchise for the foreseeable future. That changed once James returned to Cleveland a few days later.

Hollins’ take can’t be completely ignored, as James has long been known to be passive aggressive towards teammates in the past, and, as one of the all-time greats, seems to have a sense of entitlement. Did that rub off on Irving while both were in Cleveland? Probably a little bit. But is it all James’ fault that Irving has acted the way he has since the two stars split? That’s a bit of a stretch.