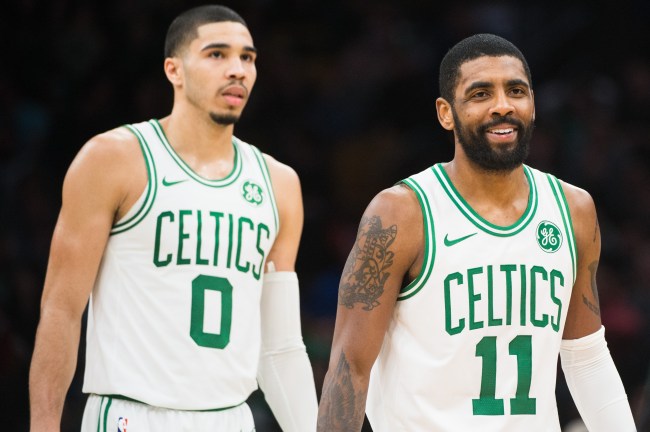 Kyrie Irving had a pretty drama-filled experience as a member for the Boston Celtics over the past couple seasons since being traded to the team in the summer of 2017 from the Cleveland Cavs. Irving, who is one of the best players in the league and a perennial All-Star, never seemed to fit in with his younger Celtics teammates, and, after the team went to the Eastern Conference Finals without Irving in 2018 with a young nucleus, things seemed to fall apart this past season.

There were numerous reports of frustration, as Kyrie Irving — who wanted to be “the man” and No. 1 option for a franchise instead of playing alongside LeBron James in Cleveland — even went as far as apologizing to James after learning that leading young players isn’t easy, and he respected the way the four-time league MVP treated him while they were teammates. More recently, Irving is believed to be ghosting the Celtics as free agency nears, which all but ends any hope of the franchise re-signing him.

Given Irving’s lack of leadership since joining the Celtics and his mega ego, it’s probably not surprising to see this latest report from journalist Jeff Goodman, who claims that Irving, like James before him, rode the young Jason Tatum harder than normal, with the writer even suggesting Irving held Tatum back. Here’s what Goodman had to say while a guest on NBC Sports Boston’s Arbella Early Edition, per Yahoo! Sports:

“I just think that (Tatum) was held back by Kyrie. I really do. I feel like Kyrie treated Tatum like LeBron treated Kyrie to some extent. You’re my little brother. This is where you’re going to be. We’re not gonna let you spread your wings too much. We’ll let you spread them, but you’re still a piece here. If Tatum were allowed — and he will be this year — we’re going to see. This kid is going to be a perennial All-Star in this league.”

Whether the report is true or not, it definitely doesn’t help Kyrie Irving’s reputation when related to his upcoming free agency. The All-Star guard has always thought of himself as “the man,” but if he’s unwilling to coexist with teammates and actually holds them back from reaching their potential, that’s not a good look.

There were already plenty of question marks from teams regarding Irving this summer, and the fact that he treated Tatum more like a little brother rather than an equal should be another red flag. After all, some already thought Kyrie was toxic even before this latest report.