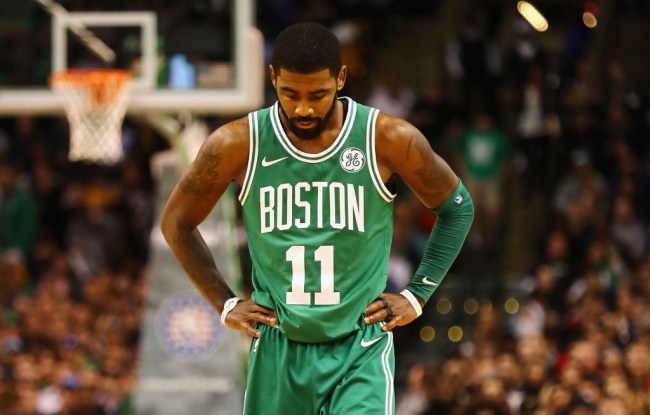 The Celtics entered this year’s season with high hopes but failed to live up to expectations after getting eliminated from the playoffs in the second round, and while you can’t blame their underwhelming performance on one person, that hasn’t stopped plenty of people from pointing the finger at Kyrie Irving.

Irving might have been the most talented player on the Celtics, but based on a number of reports, he was also the most cancerous.

During the regular season, he ripped into his less experienced teammates for the pettiest of reasons, and once the Celtics were sent packing by the Bucks, more reports started to trickle out concerning his detrimental locker room behavior.

There was plenty of speculation throughout the year that there was no chance Irving would be returning to Boston once he entered free agency. Now, based on a report by the Boston Globe, it looks like that’s all but confirmed.

On Monday, the outlet revealed Irving has apparently stopped communicating with the Celtics entirely, saying:

The strangest part of the Irving situation right now is that it appears he has essentially ghosted on the Celtics. The people within the organization I have spoken with have made it clear that they have had little, if any, communication with Irving in recent weeks.

As of right now, the Nets appear to be the frontrunners to land Irving, and while LeBron James has expressed interest in recruiting him to join the Lakers, it’s doubtful he’ll head west thanks to their lack of cap space unless he feels like taking a massive pay cut.

I’m going to need so much popcorn to make it through this offseason.