The Lakers Completely Suck, But This SUPER Detailed Tattoo A Fan Got Of LeBron James Is Totally Awesome 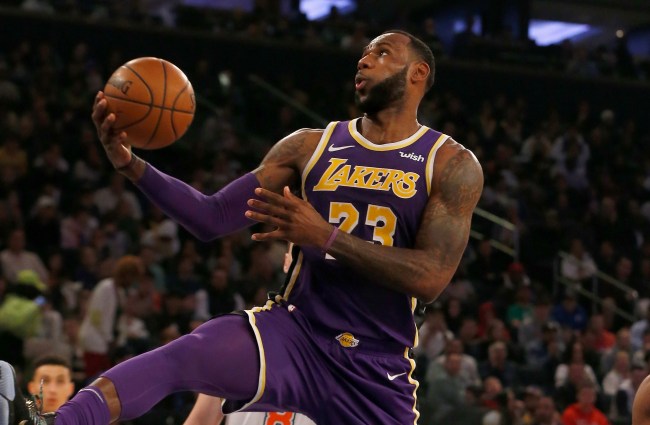 LeBron James’ first season with the Los Angeles Lakers hasn’t exactly gone as planned, guys. After leaving the Cleveland Cavs over the summer for the glitz and glam of Hollywood in sunny SoCal, “The King” has fallen off his throne and come back to earth a little bit, with the Lakers struggling all season long as drama and dysfunction has defined them. Hell, someone even created a hilarious “One Shining Moment” video to detail the team’s failures.

Although James is still putting up his typical numbers this year, it actually seems like he’s less of a draw now than he ever was in Cleveland — which is insane to think about given the iconic franchise he now plays for. But that doesn’t mean that LeBron James is any less beloved by fans, as he’s, arguably, the most popular (and polarizing) athlete on the planet.

And if you need anymore proof of that, just take a look at the tattoo that a LeBron fan got of the three-time NBA champ, which is super detailed and totally awesome.

The piece was done by an artist by the name of Luka Lajoie, who posts a lot of his work onto his YouTube channel to show how in-depth the designs are, as well as the grueling process and details that goes into creating new ink. And, while Luka has some badass examples on his social channels, this LeBron James one has to go down as one of his best.

So, sure, the Lakers are struggling, have been pathetic since February 1, are going to miss the playoffs and are the butt of jokes for all basketball fans, but that doesn’t mean LeBron James still doesn’t have some diehard fans willing to go to great lengths to support him. And this massively detailed tattoo is just another unique way some people show their love for the dude.