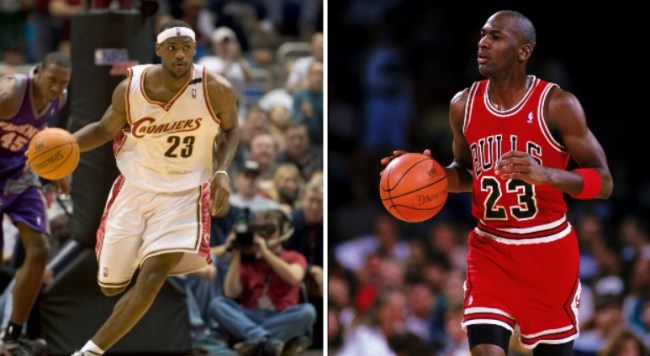 It appears that Michael Jordan and LeBron James were a superteam during offseason scrimmages back in the day.

Earlier this year, a photo of a young LeBron and Jordan playing in a scrimmage went viral.

Why have I never seen this picture? pic.twitter.com/or2VLdESY5

Someone find the footage of this scrimmage with LeBron and MJ. pic.twitter.com/oapWDVWw0q

On Monday night, LeBron hosted an afterparty to discuss “The Last Dance” and was asked about the photo.

According to LeBron, the photo was from a scrimmage in Santa Barbera from 2003 and he was actually on the same team as Michael Jordan.

LeBron talks about playing on same team with Michael Jordan during scrimmages in 2003 "We didn't lose a game" pic.twitter.com/j9FvTlz4Qz

LeBron then went on to tell a hilarious story about Jordan talking trash after hitting a game-winner in one of the scrimmages in Antoine Walker’s face.

Bron says he got to play pickup against MJ when he was 16 years old.

MJ hit the game-winner and reportedly said "That's why they pay me $33M to do this." 😤