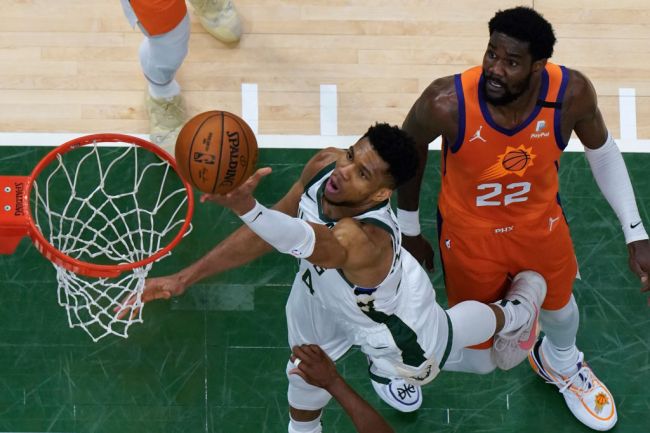 December 2020. Days before, Giannis called LeBron James the “best in the world,” despite the Greek Freak posting back-to-back MVP seasons. At the time, the then 24-year-old put together consecutive seasons of averaging 27.7 and 29.5 points per game respectively and was exuding big Face Of The Game vibes.

But his individual success hadn’t yet translated to the Bucks organization at large. The Bucks were handily swept in the 2019 ECF to the Toronto Raptors and squeaked out one win against the Miami Heat in the 2nd round of Bubble Playoffs.

Now, just one win from earning the Bucks franchise its first title in 40 years, it’s interesting to revisit the hot takes swindling when Giannis hadn’t quite figured it out.

On his RoadTrippin Podcast, Channing Frye addressed a Twitter thread in which he claimed “Giannis can’t score” and the Bucks aren’t any better despite recently acquiring All-Defense guard Jrue Holiday.

A couple weeks later, LeBron appeared on the podcast to express support for Frye’s claims, accusing the naysayers of only scratching the surface of the

Giannis is averaging 32pts on 61% shooting in the NBA Finals and LeBron had a front row seat to witness it.

“Channing said last week, I don’t care; Milwaukee didn’t get better because Giannis can’t score. And people online went crazy because they were like ‘the guy averaged 30! What do you mean he can’t score?’ I know what Channing is basically talking about. You got to break down the game. Everyone is so like, instant oatmeal, so surface.”

Giannis just became the second player in NBA Finals history with 40+ points and 10+ rebounds in back-to-back games. He also joined Willis Reed as the only players with 100 or more points and 40 or more rebounds in their first three career Finals games.

If Giannis pulls out a W tonight in Milwaukee, he will have matched LeBron’s title count at 26 years old.