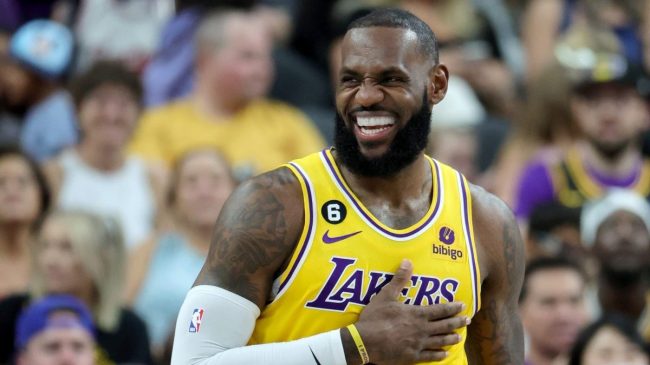 LeBron James has had an interesting start to the 2022 NBA preseason. The Los Angeles Lakers superstar missed every shot he took in the team’s opening game against the Sacramento Kings. Naturally, that led fans to bring the jokes out in bunches.

But James bounced back in a big way against the Phoenix Suns on Thursday night. Albeit the same Phoenix Suns team that was previously blown out by an Australian team to start its preseason.

The four-time NBA MVP racked up 23 points in just 17 minutes on 8-of-11 shooting and tossed in four assists and three rebounds for good measure.

But it’s what James said after the game that caught the attention of NBA fans.

The Lakers and Suns exhibition was played in Las Vegas’ T-Mobile Arena. Vegas is also the site of the league’s annual summer league and a potential top-tier NBA market. Such a good market, even, that James believes that the league should have a team there.

“I would love to bring a team here at some point. That would be amazing. I know Adam is in Abu Dhabi right now, I believe,” James said, alluding to the Milwaukee Bucks and Atlanta Hawks’ preseason trip to the United Arab Emirates that (NBA commissioner) Silver is attending. “But he probably sees every single interview and transcript that comes through from NBA players.

It’s not the first time he’s discussed the matter, either. On an earlier episode of his show YouTube show The Shop, James not only that he wants a team in Vegas, but also that he wants that team.

Though it doesn’t seem he’ll get his wish anytime soon. Silver said earlier this year that he doesn’t foresee the league exceeding its current 30 teams.

“We are not discussing that at this time,” Silver said. “As I said before, at some point, this league invariably will expand, but it’s not at this moment that we are discussing it.”

Though he also brought up Las Vegas as a potential market should the league eventually expand.

“Those are wonderful markets,” Silver said. “We were in Seattle. I’m sorry we are no longer there. We have a WNBA team in Seattle in an almost brand-new building that’s doing spectacular. And Las Vegas, where we will be at our summer league in July, has shown itself to be a great sports market as well.”

So James may well still get his wish.