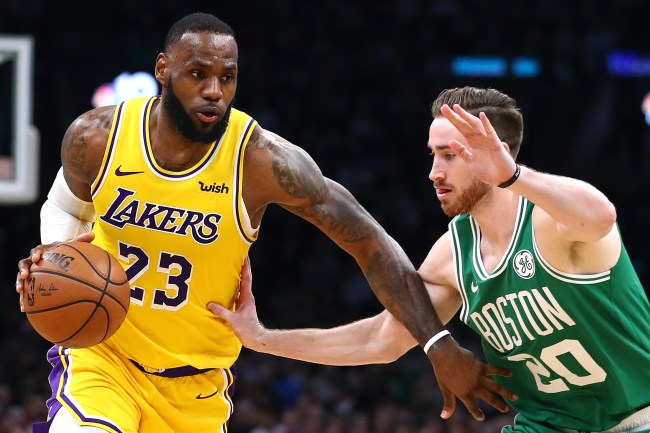 LeBron James knows that he’s the best basketball player on the planet. Even in a season where he’s missed a bunch of games because of injury, he’s still an unstoppable force anytime he’s on the floor, and, just his presence alone, makes the L.A. Lakers a legit contender in the Western Conference. If you doubt that, just look at the 2018 Cavs team James dragged to the NBA Finals as a No. 4 seed as proof, because Playoff LeBron is like Playoff Brady; nearly unstoppable.

One of James’ best attributes happens to be his confidence, which is why he’s accomplished so much during his playing career. He knows he can beat you, he’ll tell you he can beat you and he shrugs it off as no big deal after he beats you. LeBron James, to steal the words of Terrell Owens, “loves me some me.”

Knowing the impact that he has on the entire league, LeBron James showed some of that confidence yesterday after the NBA Trade Deadline, when he was asked what he thought about the top teams in the Eastern Conference loading up and acquiring some big-time players. As the headline says, it’s peak LeBron.

“Those top teams in the East, yeah, they’re going for it,” James told The Athletic’s Joe Vardon on Thursday. “Toronto is going for it, Milwaukee’s going for it, Philly. Boston believes they can do it, too.”

“Sh*t, I was excited seeing all the moves they made in the East today,” James said. “Those matchups in the second round, in the Eastern Conference finals, that sh*t is gonna be crazy. It’s gonna be fun to watch.”

As arrogant as LeBron James sounds here, the dude does have a point. Not counting this season, James has gone to the NBA Finals in nine of the past 12 seasons, with a current streak of eight in a row. So until someone bumps him off that perch, he has every reason to talk.

Still, it’s kind of d-bag thing to say, but, hey, he’s the king, so he can pretty much get away with whatever he wants to.

With teams like the Philadelphia 76ers adding a scorer in Tobias Harris, the Milwaukee Bucks getting Nikola Mirotic and the Toronto Raptors putting Marc Gasol in their lineup, it’s true that these squads know that the time is now to really go for a title run. It’ll be interesting to see which moves are the most impactful — and, when it comes to LeBron James’ comments, if these teams outlast him and the Lakers in the postseason this year.