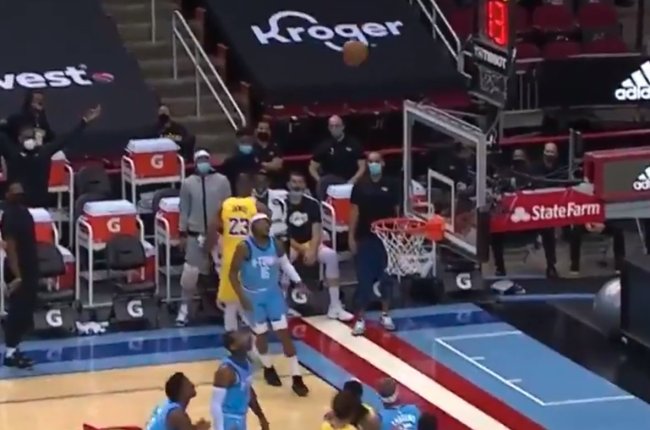 LeBron James knew his three-point attempt went in before it came down. The 36-year-old is averaging 24 points, 8.3 rebounds and 7.7 assists per game this season for the Lakers and had another great night on Tuesday. Los Angeles went up big in the first half against Houston and never looked back. Literally.

As Markieff Morris drove to the baseline, he kicked it out under the net to James in the corner for a wide-open three. He pumped once and left Ben McLemore looking silly as he knocked down a jumper from beyond the arc. Less than a second after hitting the ground, James turned and looked at his bench. The ball went in as he faced away from the basket.

The whole sequence was ruthless and it was only in the second quarter. This angle is downright dirty.

This is not the first time that an all-time great player hit a no-look three, but it was definitely one of the most merciless. Steph Curry is the other who has notably done it more than once in Golden State.

His former teammate Kevin Durant also has turned around before the shot went down.

James had 23 points at the end of the third quarter and dropped 26 in the game. James Harden continues to be frustrated with his team and a 17-point loss on Tuesday will only add to that disgruntlement. To his credit, having the best basketball player of all-time drop a no-look triple in your face must be demoralizing. Especially if it happens in the second quarter.