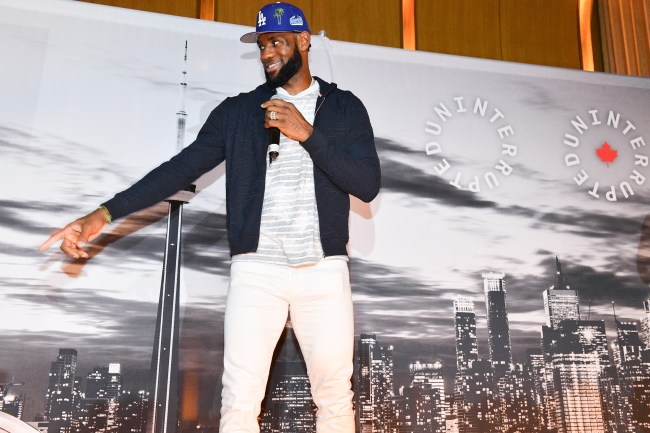 LeBron James is built like an absolute tank. Standing 6’8″ and weighing 250 pounds of nothing but muscle, the Los Angeles Lakers star isn’t easily duplicated no matter where he goes, making it very hard for him to hide. That doesn’t mean that it’s impossible to at least try, though.

And, while James has been busy filming Space Jam 2 this summer with other NBA and WNBA stars like Damian Lillard, Anthony Davis, Klay Thompson, Chinenye and Nneka Ogwumike, and Diana Taurasi, among others, the three-time champ isn’t wearing himself out by running around on the court nonstop; so don’t be concerned, Laker fans. That’s because LeBron’s actually got himself a “basketball double” who is performing lots of the on-court stuff, giving James a break so not to wear out his body.

Space Jam 2 has cast a basketball double for LeBron. pic.twitter.com/nNJMVfFLWZ

So, who is this mystery man who’s being asked to portray LeBron James? His name’s Sheldon Bailey, a former pro basketball player who stands 6’6″ and has served as body doubles for other basketball stars like Shaquille O’Neal, Dwayne Wade and Kobe Bryant in the past. And, according to a 2014 piece from Yahoo! Sports, he’s already acted as James a couple times before, where the actor explained the wild details it takes for him to get into character.

“On top of the nine hours of tattoos, I’ve been through some of the longest, most painstaking fittings as LeBron when he’s not available. One time, I had a 10-hour fitting. I don’t know how many clothes I tried on. It was ridiculous.

“And I just don’t stand there for him; I’m also a body double in the commercials. They use my likeness on camera as LeBron quite a bit. It’s hard to find someone his size with the athletic ability to do it, so I’ve been doing it for a while. The last big commercial I did was the NBA 2K14 commercial. And they fly me to whenever they’re preparing production. I’ve flown to New York to be LeBron, San Francisco, Miami. I’ve probably been LeBron more than anybody else except LeBron.”

Here’s some of Bailey’s work as LeBron James in the past, when he stood in for the then Miami Heat star in a promo for the video game NBA 2K14.

Of course, this all leads to the question of why LeBron James needs a hoops double in Space Jam 2, right? As mentioned earlier, the guy’s built like a tank, so can’t his body withstand a little light basketball that’s not at the level he’s used to playing? Well, it probably is, but, apparently, this all comes down to liability, making sure the Lakers star doesn’t get injured while filming.

Hey, that’s not such a bad insurance policy, considering anything can happen while playing around and going half-speed. Like, what would happen if LeBron James rolled his ankle or broke his finger or something like that? So Sheldon Bailey’s there to offer up his own body for any potential injury. And, according to a more recent Yahoo! Sports piece, the actor sure doesn’t sound upset with his job.

“For the past eight years, I have had the opportunity to be a body double for LeBron James,” Bailey told The Hype Magazine in 2018. “This role has taken me all over the country and across the world, and it has put me in direct contact with some of the best directors and producers in the world. Even though I had a lot of fun playing Kobe Bryant and Dwight Howard in the past, there is no comparison to the work I have gotten as LeBron James.”

So when you’re watching Space Jam 2 in a couple years once it hits theaters, make sure you pay extra close attention to LeBron James’ lead character on the basketball court, because he may not be quite as physical a specimen as the four-time league MVP is.