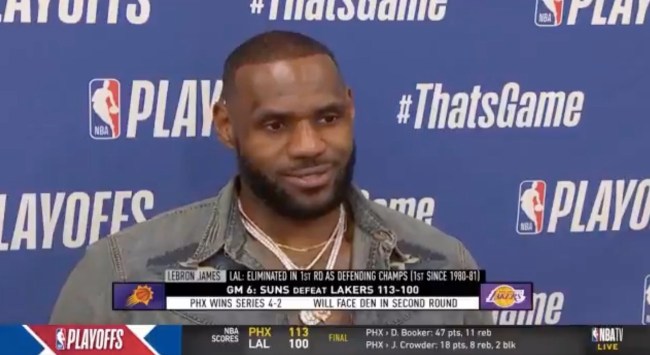 As to keep your expectations for this article within reason, I’m going to get ahead of this one and let you know that I’m not one of those rabid LeBron Haters. Sorry, people who’ve started conveniently crusading against him in the last few years due to your/his political affiliations, but you aren’t going to find that sort of vitriol here.

Still, just because I don’t out-and-out despise LeBron James doesn’t mean I can’t be objectively critical of his behavior, whether that behavior be leaving the bench with five minutes left in Game 5 against the Suns, walking off the court without shaking hands with the team that just eliminated him, or using his postgame press conference to immediately start shilling Space Jam: A New Legacy.

That’s right, after losing in the first round of the NBA Playoffs for the first time in his career, LeBron used his postgame presser to market his upcoming Space Jam film, working in a corny reference to the “Goon Squad” when asked about his summer plans, particularly how they pertain to the Olympics in Japan:

“I think I’m going to play for the Tune Squad this Summer instead of the Olympics. That’s what I’m going to focus on, trying to beat the Monstars — or the “Goon Squad”, we call them now,” LeBron said when asked about his Summer plans.

“Didn’t have much success versus the [Phoenix] Suns, so now I am gearing my attention to the Goon Squad here in July. I’m going to let the ankle rest for about a month and then I’m going to gear up with Lola [Bunny], Taz, Granny, Bugs, and the rest of the crew”.

LeBron with a free promo for Space Jam 2 to close out his press conference:

"Didn't have much success vs. the Suns, so now I am gearing my attention to the Goon Squad here in July."#PHXvsLAL #NBAPlayoffs pic.twitter.com/rBjdZnGZx7

Look, I get it — LeBron is trying to sell a multi-million dollar movie every chance he gets. You’d probably do the same. The issue is the timing of it all. This press conference probably took place at close to 2 a.m. eastern time: no kids, who are the target Space Jam audience, are staying up to watch, and even if they are, they’re likely already committed to seeing A New Legacy as they’re quite obviously big LeBron James fans, you know, considering the fact that they stayed up to watch his press conference to begin with. That journalist asked a very legitimate basketball question and he turned it into a commercial for a movie about basketball-playing cartoons.

Conversely, LeBron must’ve known there’d be writers like me who’d take issue with it. He must’ve known there’d be sports purists complaining about how quickly he moved on from his embarrassing first-round exit at the hands of the Suns and onto hawking his new movie. Then again, maybe that was all part of the plan, as I’m now here writing about Space Jam: A New Legacy, giving it free press. And if that’s the case, then… whoops. I fell right into the trap, and I guess you did too. LeBron sure as hell hope A New Legacy is solid, though, because I’m not sure the internet will ever let him forget it if it’s not.

Lebron boutta be at the premiere of Space Jam 2 down bad pic.twitter.com/qJ0sRsziH2

Me watching Lebron in Space Jam 2 this summer: pic.twitter.com/uUEopsE17p

they going to delay Space Jam because of this?

This is affecting my desire to see Space Jam.

Michael Jordan waiting for LeBron James on the set of Space Jam 2: pic.twitter.com/dX6kxIDP8S

Here’s the official synopsis for Space Jam: A New Legacy, via Warner Bros: