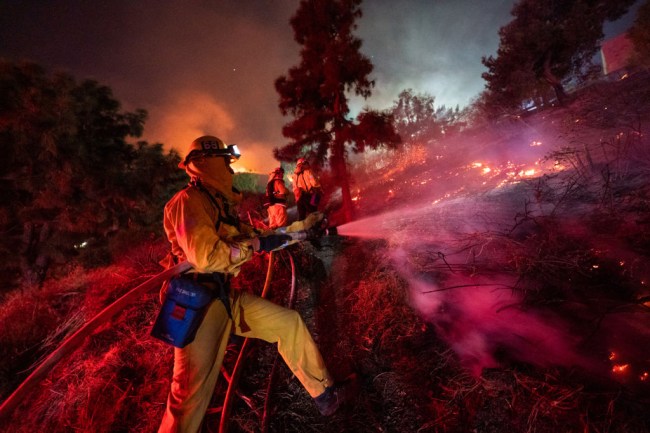 The state of California seems to be an absolute haven for natural disasters, and shortly after wildfires broke out in Sonoma County last week, Los Angeles found itself facing a blaze of its own in the form of the Getty Fire, which has consumed over 650 acres since it was sparked on Monday.

Photos and videos that emerged from the area highlighted just how scary things have gotten as tens of thousands of people have been forced to evacuate—including LeBron James, who revealed he had to flee his home and find somewhere else to hole up after he was informed his house was being threatened by the fire.

Only 15% of the Getty Fire has been contained as of this writing and responders on the ground (and above) are doing everything in their power to combat it as people in Los Angeles and beyond make what strides they can to help out the brave men and women who are sacrificing their safety for the greater good.

This includes LeBron, who reportedly celebrated his favorite day of the week by commissioning a taco truck to stop by a base camp to feed the people who continue to battle the fire (I can only assume he realized sending them some pizza from Blaze would have been in slightly poor taste).

Hearing that LeBron James has sent a taco truck to feed lunch to the first responders fighting the Getty Fire today at their base camp. James, this morning, had this to say about their efforts: "It’s an amazing job what they do and their commitment with what’s going on right now"

Thank you, @KingJames, for generously sending a taco truck to support our @LAFD firefighters, first responders, and partner agencies working to fight the #GettyFire. pic.twitter.com/rgTSMgWXLU

Guy Fieri also did what he could to aid efforts a bit further north by continuing a proud tradition and offering his services to people taking refuge from the Kincade Fire even as his home is threatened by the inferno.

Mayor of Flavortown @GuyFieri stopped by one of our shelters in California to cook food for those affected by the wildfires with @WCKitchen. He ran into @RepThompson while he was there. Thanks for the support, gentlemen! #kincadefire pic.twitter.com/zDtLhoxzia