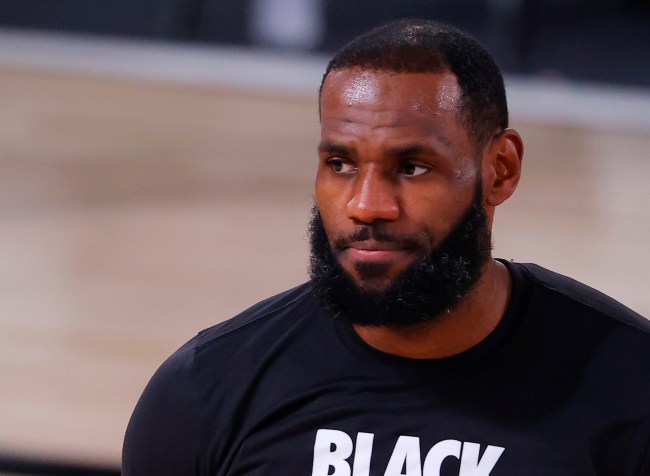 LeBron James is trying to clear the air after it was reported that were was a rift between him and other players during meetings this week to decide whether or not to resume the season following the shooting of Jacob Blake.

On Wednesday night Yahoo Sports’ Chris B.Haynes revealed that a frustrated LeBron had stormed out and had voted to sit out the remainder of the season after George Hill and the Bucks had decided amongst themselves to go on strike.

LeBron spoke to The Athletic’s Joe Vardon and says he was willing to quit the season because the Bucks didn’t have a plan but then decided to continue playing when he came up with a plan overnight.

LeBron doesn’t go to the basket without a plan. So when he didn’t hear one after the Bucks’ boycott, he was ready to quit this season, he tells @TheAthleticNBA. And then he came up with one so he wouldn’t have to https://t.co/VqLPia0F9W

“When I went to bed, I had major reservations about playing,” LeBron told The Athletic. “It wasn’t what they (the Milwaukee Bucks) said; we heard what they said. It was, What the fuck are we going to do now? Are we just going to go back out there and play again, after all of this, with no plan? Nah. What was the plan?

“I woke up Thursday morning and I came up with a plan,” he said.

The plan that was put in place Thursday and Friday, through calls between the players and owners, including at least one in which LeBron participated, is for the creation of a social justice coalition among players, coaches and team front-office members; the transformation of arenas owned by NBA teams into polling places in the November election; and ads running during playoff games promoting voting access and civic engagement.

LeBron’s comments go against what Stephen A.Smith reported earlier in the week about players and owners being ‘turned off” by LeBron’s actions during meetings.

"He was speaking out of pocket and was talking to players in a fashion that really turned some of these young cats off . . . He came across as if he was the King with some crown."

Fans don’t seem to be buying LeBron’s narrative that he alone came up with the plan that saved the season.

Cmon bro. It’s been multiple reports that Iggy, CP, and Michele Roberts were enormous in forming this plan. As well as other advisors. Why are we not talking about that instead leading like it was a one man show. https://t.co/zydUct1XvG

He came up with the entire plan himself Joe? Why is this necessary? I believe the Bucks sought guidance just as he did. I believe CP & Andre Iguodala were very involved in developing the plan. Michele Roberts was key. Stop this lionizing madness!!! It was a collective effort. https://t.co/kH9sIsOW7p

Incredible. LeBron cancelled the season and then saved it all in 24 hours. https://t.co/scqIoikuDh

“i came up with a plan.” it’s clear lebron wants to be seen as they guy in front of whatever is done. if it’s getting annoying to me, i can’t imagine how sick of it his colleagues are.

There’s a lot of “he” in this tweet https://t.co/NuJYxYdoXA

“I woke up Thursday morning and I came up with a plan” has to be annoying to all the dudes who put in work behind the scenes. I’m annoyed by this so I can only imagine how annoyed dudes were in that meeting last week. https://t.co/lD852VNCck