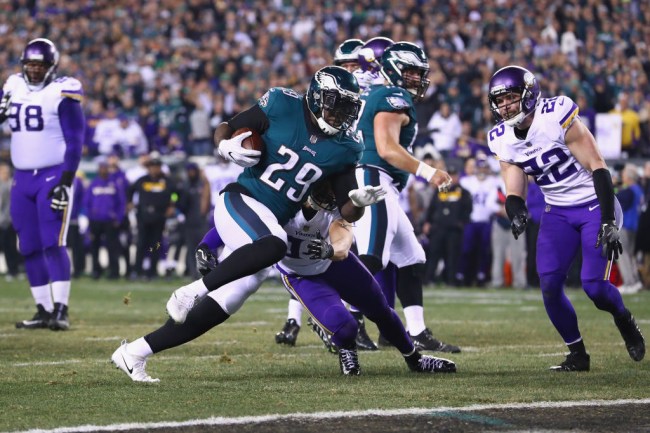 LeGarrette Blount won two Super Bowls with the New England Patriots but now that he’s a member of the Philadelphia Eagles his former team is now the enemy in his eyes.

“Straight enemy mode,” Blount emphasized to reporters Thursday. “Ain’t no friends. Ain’t no homies. None of that. We know … we know what we’re going to do. They know what they’re going to do. We both have the same goal in mind. There aren’t any hard feelings, it just is what it is.”
“I play for the Eagles now,” Blount said, via NJ.com. “I don’t play for the Patriots, anymore. I don’t watch the Patriots. I don’t care about the Patriots. I just focus on what we need to do to put us in the best position to win this game. I had a great time there last year, but, last year is last year.”

Blount has seen limited touches for the Eagles every since Jay Ajayi joined the team in early November but the former Patriots running back is taking a leadership role in the Eagles locker room during the team’s playoff run.

“I told the young guys this, you just have to be a professional. Control your emotions,” Blount said. “As rookies, they haven’t played, even national championships, they still haven’t played in a game this big, with this magnitude, so it’s tough. We enjoyed our NFC championship game, but it’s back to work.

“We know what we got to do. We know what we want to do and it’s a long, 10 or 11 however many days until it comes. You just have to control the emotions and whenever the game starts just unleash them.”

We’ll have to wait and see if Blount is victorious against his former team in a couple of weeks.