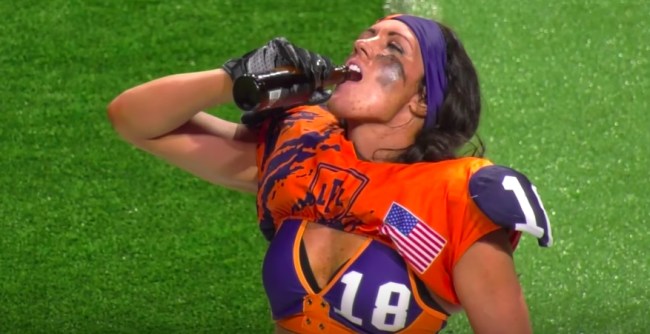 The Legends Football League, formerly the Lingerie Football League, has produced some electric moments since its inaugural season in 2009. Like coaches going batshit crazy on their team at halftime. Or coaches getting into the screaming matches with opposing players. Or players dragging their opponents 10-yards by the hair.

Petruziello was named Game MVP of a 76-0 rout of the Omaha Heart en route to the Conference Championships this Saturday in Chicago. Petruziello’s team is undefeated, she was named MVP of the Conference semis, and now has an opportunity to secure a Conference title. How could this moment possibly go wrong?

No literally someone go get her beer from her because she’s obviously never had one in her entire life, if this celebratory clip is any indication.

The beer chug is a Game MVP tradition that was started by Chicago Bliss Quarterback Heather ‘Rockstar’ Furr years back. The tradition should now be buried now that Petruziello took it behind the barn and shot it.

For comparative purposes, here is Chicago Bliss free safety Alli Alberts taking down a beer pridefully after being named Game MVP back in April of 2015. Warning: you may fall in love.

If Petruziello is able to secure a Game MVP for the Conference Championship, maybe a shot would be more manageable?