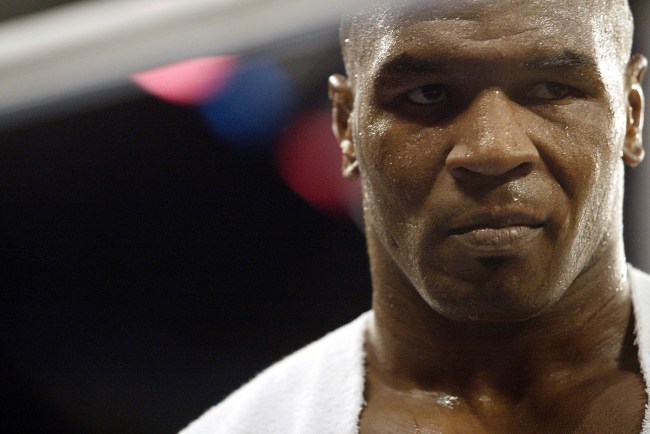 Lennox Lewis fought Mike Tyson on June 8, 2002, at the Pyramid Arena in Memphis, Tennessee. At the time, the bout was the highest-grossing pay-per-view event in history, making $106.9 million from 1.95 million PPV buys. That fight held the PPV title for five years after the fight. Lewis dominated the fight and knocked out Tyson in the eighth round. Now, Lennox is talking about a rematch against Tyson, but he wants a huge payday.

In the first fight, both heavyweight boxers were guaranteed $17.5 million. For the rematch, Lewis would want a massive raise and would only fight Tyson if he was paid $100 million. Of course, that’s even if there was even enough interest to watch two older gentlemen try to knock each other out.

Last week, on the Joe Rogan Experience podcast, Lennox said he would welcome a rematch against the fellow world champion on one condition. “Well you know, I told people that I’d take my pajamas off for a 100 million,” Lewis said. “So if you’re serious — come with it baby, show me the paper.”

Keep in mind, $100 million guaranteed is the kind of money that Floyd Mayweather got in his fight with Connor McGregor.

Despite some gray hairs, Lewis looks to still be in terrific shape.

Iron Mike is still in ferocious fighting shape as evidenced by this 2017 video of Tyson throwing some lightning punches that recently resurfaced. I’d pay for a Tyson-Lewis rematch even with both legendary boxers over 53-years-old.

Iron Mike still got it 🔥 pic.twitter.com/S0dGHXnOG3

Also in the interview, Lennox admitted that he didn’t face Tyson at his best and maybe he was fighting for money and not for the love of boxing. “I looked at Tyson’s history, he’s coming from the same history that I’m coming from and he spent some time in incarceration,” Lewis told Rogan. “While he was in incarceration I’m still out there fighting and training hard, he didn’t have that in there so when he came out it was like training again doing what he knows not what he loves, that’s going to make him some money – that’s going to put some food on the table.”

Lewis also explained why fighters stay in the fight game too long. “I look at old time fighters and say, what made them stay in boxing so long, that’s the only thing they knew,” Lewis said. “They’re not going to be no singer or dancer or whatever they only know boxing and this is where they get their money from so that’s what forces them back into the ring.”

You can watch the entire Joe Rogan Experience interview with Lennox Lewis and Russell Peters below.