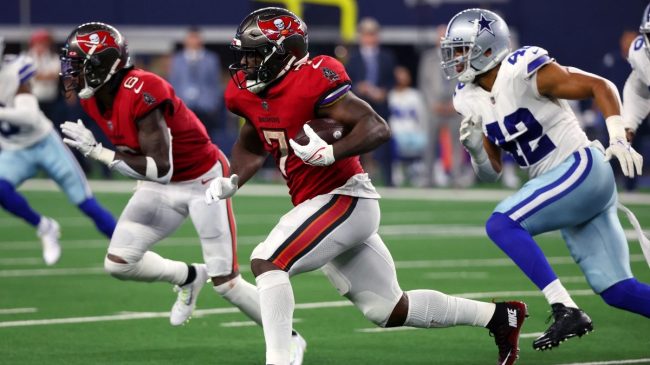 The Dallas Cowboys got routed by the Tampa Bay Buccaneers in the season opener. They didn’t look great throughout most of the matchup, but at least Micah Parsons stood out amongst his teammates. After the game though, Parsons wasn’t too happy about a particular highlight of Leonard Fournette and now the Bucs running back responds.

Leonard Fournette hilariously hits Micah Parsons with the Michael Jordan crying GIF. This of course is his response to Parsons calling out the media for “hyping” a blindside block. In the highlight, Fournette knocks the Cowboys star to the ground. It was a vicious hit and the Buccaneers running back clearly doesn’t care about the criticism.

In fact, it appears many are siding with Leonard Fournette in this situation. Chip blocks have been prominent throughout football since the beginning. The sport has tried to cut down on blindside blocks but this play is as fair as it gets.

I love how you lost and went straight to twitter🤣

Shaun Smith provided some words of wisdom. Maybe next time Micah Parsons will look for the chip block, whether it’s from Leonard Fournette or not.

Off Twitter Brotha We Got 16 More Weeks And Then Some💯💯

At the end of the day, it was a clean block and Leonard Fournette got the best of Micah Parsons on that specific play. Additionally, it doesn’t hurt that the Buccaneers beat the Cowboys either.