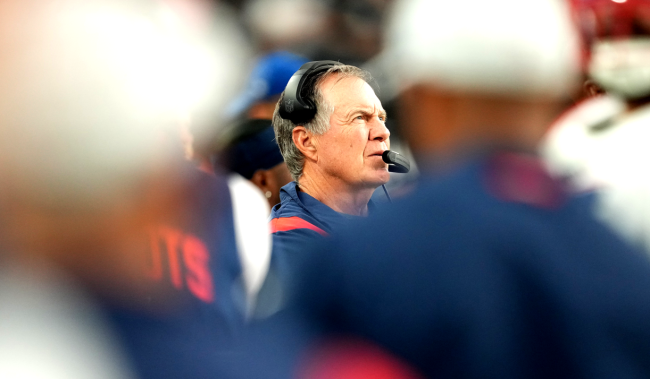 In 20 seasons with Tom Brady as the starting quarterback for the New England Patriots, head coach Bill Belichick went 230-69. He made it to nine Super Bowls, winning six of them and established himself as one of the greatest coaches in NFL history.

Prior to that, Belichick went 36-44 in five seasons as the head coach of the Cleveland Browns. Since that 20-year run with Brady, Belichick has gone 17-17.

That’s 230-69 with Tom Brady as his team’s quarterback, 71–80 without Tom Brady (including Patriots games Brady missed due to injury). Brady, on the other hand, has gone 25-9 with a seventh Super Bowl win without Belichick.

On Sunday, the New England Patriots, whose offense looked very rough all pre-season, were thoroughly outplayed by division rival Miami.

The Dolphins defense made New England look so bad in the first half of the game some Patriots fans were doing the unthinkable and calling for Bill Belichick to be fired.

This week, during an appearance on Fox Sports SPEAK, former Pro Bowl running back LeSean McCoy went HAM on The Hoodie.

“It’s over for Belichick. It’s over,” said McCoy. “I’ve never seen the Patriots pay so many guys on defense at one time. They’re doing it now that Tom is gone. It’s over. This is the real Belichick. The winning percentage, playing with Brady, is 77 percent. Without Tom Brady, you wouldn’t even guess. 47 percent. He don’t win no games without Tom Brady.

“Since Tom Brady has left, they look so regular. Seriously though, when I watch the tape and I really watch them, they’re getting beat up front in the running game, defenders missing tackles – they look bad. They can’t do anything on offense. Every coach in the AFC, for all of these years, when they had Tom Brady, they’re saying the same thing I’m saying right now. Without Tom Brady, Belichick is a good coach. Stop with all of this he’s the greatest of all time. He’s not.”