Bill Belichick, Tired Of Questions About His Offense, Says He Is Not Here To ‘Have A Science Lab Experiment’ 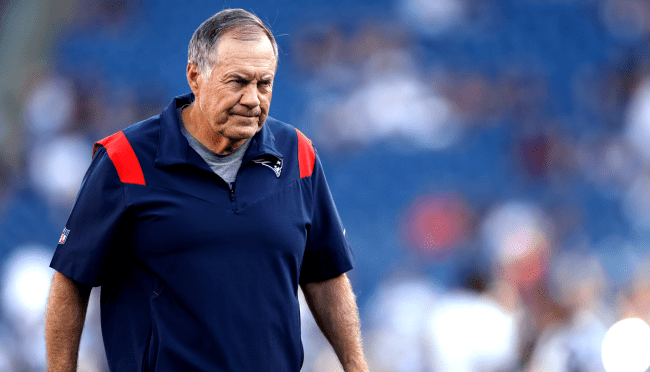 There has been a lot of talk this NFL pre-season centering on the New England Patriots’ offense.

Most of the discussion has centered on the fact that the Patriots have not had an officially designated offensive coordinator since Josh McDaniel left for the Las Vegas Raiders in the offseason.

Second year quarterback Mac Jones struggled mightily at times this summer and made some troubling comments about the offense’s progress.

Last month, when addressing reports that the offense was not looking very good, an annoyed Hoodie informed the media that the team is “going through a process.”

Fast forward a few weeks and Mac Jones appears to still be having problems and, in turn, so is the Patriots’ offense.

On Monday, Bill Belichick addressed this ongoing concern during an appearance on The Greg Hill Show.

“We’re not going out there trying to have a science lab experiment,” Belichick said. “We’re trying to go out there and win games. I think as you play games and compete against other teams, you see maybe where your strengths are, and where teams are trying to attack you and how you’re holding up in those areas.

“We’re trying to go out there and be as competitive as we can, but at the same time we’re trying to take a close look at what’s happening and how it’s all playing out.”

As we have seen in the past, it’s probably a good thing Bill Belichick isn’t “trying to have a science lab experiment.”

The Hoodie also reiterated his prior admission that he won’t fully know his team’s offensive identity until after “five, six weeks of the regular season.”

As for what the Patriots’ game plan will be for Week 1 of the NFL regular season when New England takes on Miami, Belichick said, as usual, very little. But he did compliment new Dolphins wide receiver Tyreek Hill.

“We all know that Hill is a very explosive player, can score from anywhere on the field and has game-breaking speed that we see from time to time, but it’s relatively rare,” Belichick said. “So we’ll have to certainly be aware of him, but they have other good players on that team.

“Good receivers, good quarterback, tight end, and a big emphasis on the running game with their offensive line,” Belichick added. “So it’s not just one guy to stop, we’ll have to be competitive all the way across the board and play good team defense.”

Week 1 of the NFL season is going to be very interesting in New England.