LeSean McCoy Scoffs At Suggestion Julian Edelman Is A Hall Of Famer: ‘No, Come On, Man’ 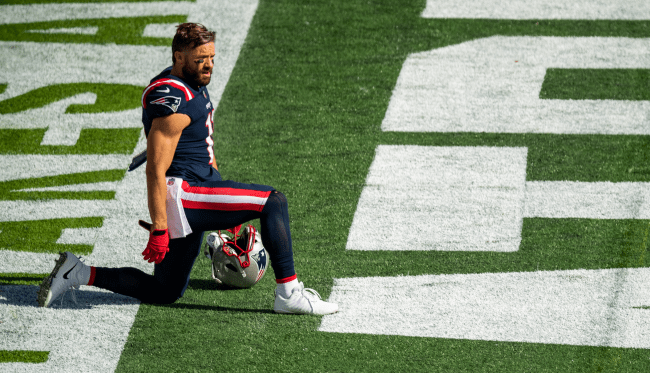 Veteran NFL running back LeSean McCoy was asked by Yahoo! Sports if Julian Edelman is a Hall of Famer and he made it very clear that he does not.

The 34-year-old Edelman, who announced his retirement from the NFL after 11 seasons on Monday, finishes his career with 6,822 yards on 620 receptions with 36 touchdowns receiving, 4 punt returns for touchdowns, three Super Bowl rings and a Super Bowl MVP award.

Great numbers no doubt, but are they Hall of Fame worthy?

This week when asked if he thinks the popular wide receiver is a Hall of Famer, McCoy bluntly responded, “Hall of Famer? No, come on, man.”

“You have 16 weeks to showcase who you are, what you can do each year,” McCoy explained. “The playoffs matter but a lot of guys don’t get a chance to play in the playoffs. I won’t discredit him because I think he’s a great player, plays with a lot of heart, a lot of attitude, a lot of passion. I don’t want to rain on his parade because he’s retiring and he’s a hell of a player, but I don’t know about Hall of Fame.”

Edelman caught 118 passes in 19 postseason games for 1,442 yards and 5 touchdowns, and also tacked on another 81 yards rushing with a TD.

Ironically, when discussing his own chances of making it into the Pro Football Hall of Fame, McCoy did cite his postseason accomplishments as supporting evidence.

“I think I’ve got a good shot at it,” said McCoy. “I put my numbers up with any other running backs. In my decade I was the lead dog. I’ve got good numbers, touchdowns, yards, yards per carry, all those things. And you add two Super Bowls with it.”

Does McCoy really have a better chance than Edelman to make the Hall of Fame? Are either of them currently worthy of enshrinement? Let us know in the comments below.