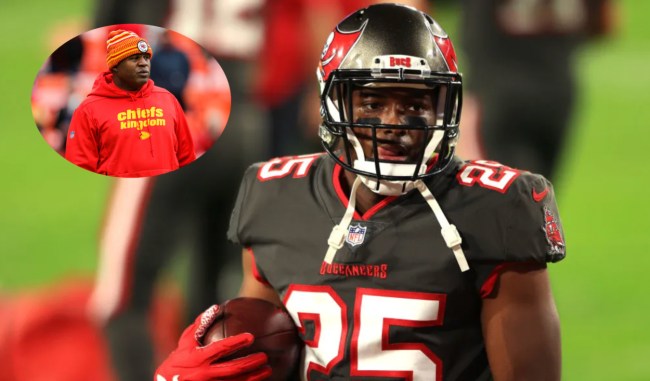 It’s tough to find one negative thing ever said about Kansas City Chiefs offensive coordinator Eric Bieniemy. He’s regarded, by both players and fellow coaches, as one of the best assistant coaches in all of the NFL, but former NFL running back LeSean McCoy doesn’t see him in that light.

McCoy recently made an appearance on ‘I Am Athlete‘ podcast and had some rather harsh things to say about Bieniemy.

Over the last handful of offseasons, Bieniemy has been mentioned as a top candidate for various head coaching jobs, but McCoy thinks he knows why he never lands the job.

According to McCoy, Bieniemy talks to his players in a certain way that not everyone agrees with. He also admitted that Bieniemy was the reason he stopped playing in Kansas City when he was with the team in 2019.

“There’s a reason why every year they hype him up to get a job and then when the time comes nobody hires him because they know the type of coach he really is,” McCoy explained.

“Listen, because some players, he talks a certain way and some players will take it. I wouldn’t take it,” McCoy said. “Some of the questions I would ask, everybody is accountable.

Shady McCoy sounds OFF about #Chiefs OC Eric Bieniemy: “there’s a reason why every year they hype him up to get a job and then when the time comes nobody hires him because they know the type of coach he really is.”

While McCoy didn’t get into specifics, he did say Beinemy not getting a head coaching job is “not because he is a black coach.”

Bieniemy has been an assistant coach in the NFL since 2006 and is closing in on a decade of time being an assistant in Kansas City.

You can certainly characterize McCoy’s statement as a broad, blanket statement seeing as how he didn’t go into specific details. It is worth noting, however, that McCoy spent 12 seasons in the NFL and played for four different franchises, he’s had plenty of experience with dozens of different coaches.

It’s interesting he has this strong of a take about Bieniemy.