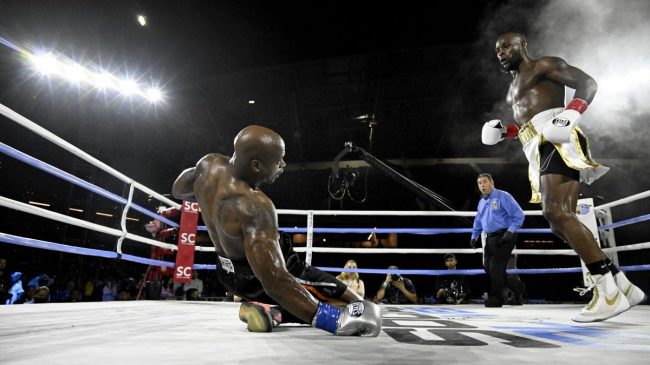 Le’Veon Bell was once considered the best running back in the entire NFL. Bell, a second-round pick by the Pittsburgh Steelers in the 2013 NFL Draft, was named first-team All-Pro in both 2014 and 2017.

But then things went downhill, and they did so in a hurry.

Bell became a free agent ahead of the 2019 NFL season and the New York Jets signed him to a four-year, $52.5 million contract that they’d soon regret. Two months later the organization fired GM Mike Maccagnan. Bell then held out of preseason due to a lingering hamstring injury.

His first season in New York wasn’t a complete disaster. Bell racked up 1,250 yards from scrimmage in just 15 games. But that’s where his Jets’ tenure peaked. He’d play just two more games for the franchise before being released.

He then bounced around the league from the Chiefs, to the Ravens and eventually the Tampa Bay Buccaneers before leaving the league in 2021 at the age of 29.

Now Bell has another career path: boxing. He made his debut on Sept. 10 in an exhibition against fellow former All-Pro running back Adrian Peterson. Bell won that fight in resounding fashion, knocking out Peterson with a thunderous straight righthand.

That’s apparently earned him a very, very large step up in competition.

Le’Veon Bell is set to make his pro boxing debut against MMA star and former UFC fighter Uriah Hall as part of Most Valuable Promotions’ Jake Paul vs. Anderson Silva event on SHOWTIME PPV on Sat., Oct. 29 in Phoenix. Bell is coming off an exhibition knockout vs. Adrian Peterson. pic.twitter.com/c6TPD7tH5K

Hall presents a formidable foe. His UFC record was just 10-9, but he faced a number of top competitors including Silva, Robert Whittaker, Paulo Costa and Chris Weidman.

Hall knocked out Silva in what was the final fight of the UFC legend’s career.

Hopefully for Bell, he’s getting quite the payday to step in with a very accomplished striker.