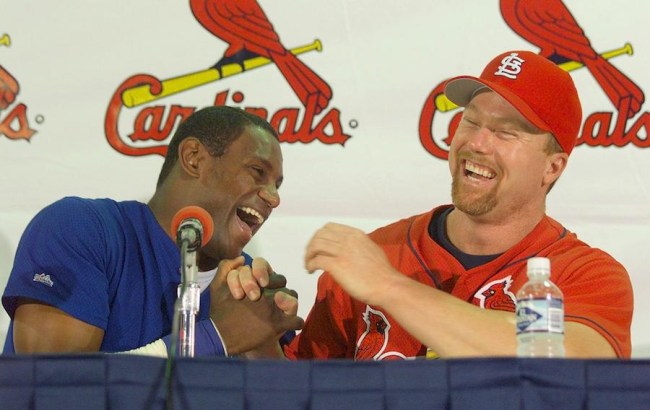 A little over a month ago, ESPN announced the forthcoming 30 For 30 documentaries set to debut this summer.

The network pushed up the debuts for Lance and Long Gone Summer after the massive success of The Last Dance.

The Lance Armstrong documentary has been a critical success but not as widely-discussed as the Jordan series.

The next documentary to debut, Long Gone Summer, will look back at the historic home run race of 1998.

ESPN released a trailer in advance of the June 14th debut and the 1:25 clip will transport fans right back to the summer of ’98 thanks to video footage and interviews with Mark McGwire and your cruise-director, Sammy Sosa.

As a kid watching back in 1998, I remember stopping everything to watch every Sosa and McGwire swing.

ESPN would break into other games and shows just to broadcast every at-bat.

I don’t remember which player I wanted to come out on top, I just recall wanting to see the race go neck-in-neck until the end.

McGwire edged out Sosa in ’98, finishing with 70 home runs to Sosa’s 66 dingers.

And then the Mitchell Report happened.

“I didn’t know anything about Sammy Sosa until he hit 20 home runs in June,” explains McGwire.

Long Gone Summer will debut on June 14th at 9pm on ESPN.