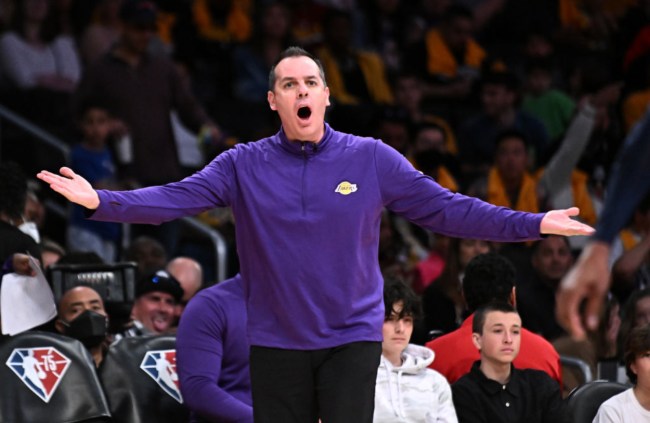 The Los Angeles Lakers are reportedly parting ways with head coach Frank Vogel at the end of the season. Vogel led the Lakers to an NBA title in 2020, but things have gone downhill quickly in Los Angeles the past two seasons. The Lakers were bounced in the first round of last year’s NBA playoffs and could miss out on the postseason entirely this season.

Not all the blame should be put on Vogel, but he’s an easy scapegoat, especially when you have LeBron James on your roster who is every bit of a player-coach-general manager figure. It’s easy to get rid of your head coach to keep the most iconic player in the league as happy as possible.

While Vogel still has a few games left to coach before being shown the door, the Lakers may already have their sights set on another championship-winning coach to replace him.

According to Eric Fischer of Bleacher Report, folks around the NBA see Doc Rivers as a potential candidate for the Lakers’ job.

“Rivers’ tenure in Philadelphia has also come into question of late, spurred by team president Daryl Morey’s deadline acquisition of James Harden and the mounting speculation that followed about a potential reunification with Harden’s former Rockets head coach Mike D’Antoni.”

Many assumed that after the Sixers acquired James Harden that things would turn around and all would be well in Philly. That hasn’t exactly been the case, and speculation has started to swirl that the 76ers may have some dysfunction inside the locker room.

Rivers being fired, or deciding to leave, if Philly doesn’t make a playoff run isn’t that far-fetched. If LeBron wants Doc, he’ll likely get Doc.