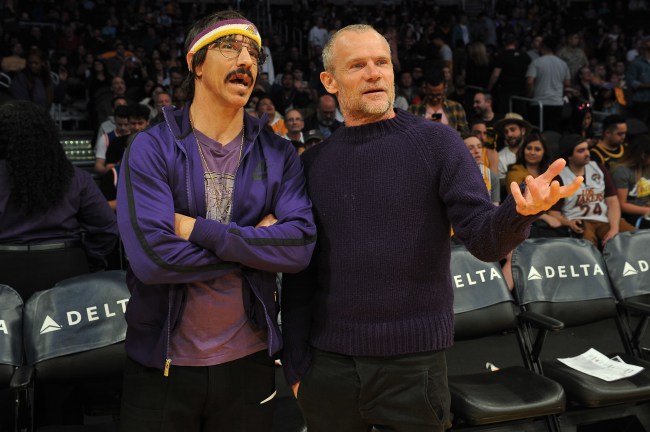 The Los Angeles Lakers are an absolute sh*tshow right now and everyone’s laughing at the slowly sinking ship. Well, everyone except Lakers fans, who have expressed frustration with how the team has played this year, as well as how the franchise has positioned itself for an apparent spending spree this summer to add another superstar or two alongside LeBron James. There just doesn’t seem to be any direction, and people in LaLa Land are pissed.

Just the other day, we saw legendary rapper Snoop Dogg post a video of his level of pissed, saying that he’s willing to give away his box seats at Laker games because of how terrible the team is. And, while Snoop went in on the team, he isn’t the only diehard celebrity fan who’s letting the franchise know this type of sh*t isn’t acceptable.

That’s because legendary Red Hot Chili Peppers bassist Flea also took the chance to express his opinions, tweeting out a few things, presumably, directed at Magic Johnson and Rob Pelinka in the Los Angeles Lakers’ front office. Here’s what the musician had to say.

Dear @lakers why do you do this to me? Do you realize there are fans out here that really care? This is seven years of this shit. Are you just gonna get more one year contracts in pursuit of a Star? I don’t give a shit about a star, build a team that loves and plays together.

It’s one thing to be frustrated with the Los Angeles Lakers, which Flea clearly is. It’s a different animal when he’s going as far as labeling this year’s squad the “most disappointing” in the team’s rich history. Given the struggles of the Lakers in the past five years — which each ended without a playoff berth — for Flea to suggest this is the one that’s most humiliating is saying a lot.

That said, the bassist isn’t wrong. ESPN showed a graphic on SportsCenter last night that showed the Los Angeles Lakers’ pathetic record since January 19. As you can see above, they stand at 5-13, which is the third worst record in the league during that timeframe, trailing only the lottery-bound New York Knicks and Phoenix Suns. Sheesh.

With no simple solution to the Los Angeles Lakers’ problems this year, it might be worth considering shutting down James for the rest of the season, waving the white flag, regroup and see which, if any, superstars want to play for the storied franchise next year. That may be drastic and un-Laker like, but, sh*t, at this point, save the embarrassment and show fans like Snoop and Flea that there’s some sort of plan moving forward.