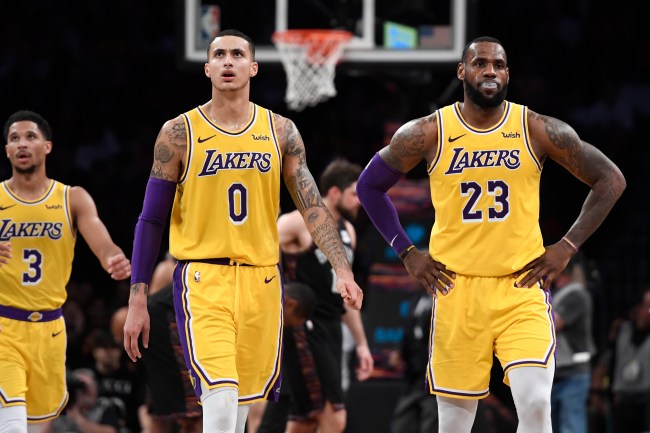 The Los Angeles Lakers are on the verge of, arguably, the biggest offseason in franchise history. Sure, that’s coming from a 30-something who isn’t necessarily a fan of the team, but, on the surface, it feels like the Lakers could either become championship contenders overnight with key additions this summer, or stay mostly irrelevant, wasting the last few prime years of LeBron James. Let’s face it, it’s why we’ve all loved following the dysfunction and drama that’s been happening now for the past few months, because we want to see how it all unfolds.

One of the biggest storylines regarding the Los Angeles Lakers has been the potential acquisition of superstar Anthony Davis, who the team tried trading for during the NBA Trade Deadline a few months ago. While there’s been a lot of back-and-forth about the Lakers getting Davis this summer, there are some factors that could swing things in either direction. And young Lakers star Kyle Kuzma might be the biggest of them all.

According to the New York Post, the Lakers covet Kuzma for a lot of reasons, mainly because the 23-year-old seems to be the perfect complement alongside James — a spot up shooter who stretches the floor. With Kuzma averaging an impressive 20.3 points per game last season, he’s sort of got this, dare I say, Klay Thompson 2.0 feel to him, which is why the Lakers are hesitant to include him in a trade for Anthony Davis.

The Lakers are reportedly trying to keep the promising power forward out of trade talks, but the Pelicans remain determined to acquire him, according to the LA Times.

Kuzma built upon an impressive rookie season, scoring 20.3 points a game last season, and New Orleans covets the 23-year-old more than any other Lakers star. However, that same sentiment is shared within the Lakers organization, and they are reluctant to part ways with him.

The Lakers have made Brandon Ingram and Lonzo Ball available in talks.

It’s a pretty interesting dilemma for the Los Angeles Lakers right now, because, as we know, you’ve got to give up something in order to get something — especially if that’s something a talent like Anthony Davis. Will that mean that Kyle Kuzma will be the one shipped off in a blockbuster deal? If so, he seems like he’s trying to avoid worrying about it. Here’s what he said back in January about his name being included in trade talks.

Kyle Kuzma says being the subject of trade rumors is a good thing. “It means you have value, and it means potentially you could be in this league a long time.”

He says when he heard that Anthony Davis wanted out of New Orleans, it didn’t make him wonder what it means for him. pic.twitter.com/CmhNIf4t6O

The Los Angeles Lakers have some major decisions coming up, and the future of Kyle Kuzma is one of the biggest. Is he a young player worth keeping and building around over the next decade, or is he expendable to chase titles in the next couple years, giving up on a potential star in the making? Either way, he better show that he’s mentally strong enough to deal with the rumors, which some young players on the Lakers weren’t able to do last year.