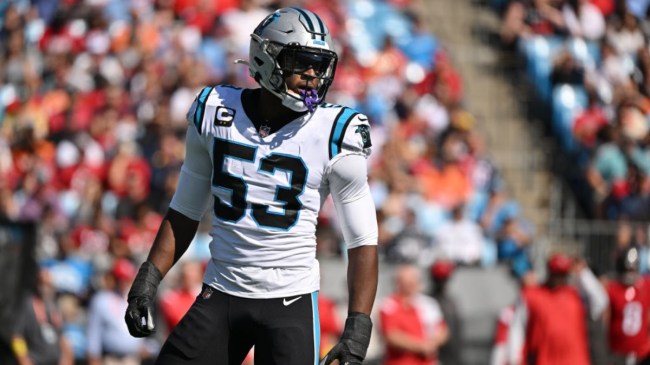 Over the past few weeks, there has been an expectation that the Los Angeles Rams would put together some kind of deal ahead of the NFL trade deadline to try and turn things around as they struggle to recreate last season’s success.

Most of the rumors about their trade pursuits have centered around running backs and wide receivers as their offense has been one of the worst in the NFL and they have run into unexpected issues at both of those positions. They even made an offer for Christian McCaffrey, but fell short of the deal that sent him to San Francisco.

While they weren’t able to land McCaffrey, it turns out that they made a massive offer to the Carolina Panthers for another player. According to Sports Illustrated’s Albert Breer, the Rams offered a pair of 1st round picks to the Panthers for Brian Burns.

Trade deadline's at 4 p.m. Here's some stuff from the last couple day …

As the Panthers have once again started up their rebuild, Burns has appeared to be one of the only players on their roster that is untouchable for interested teams and with good reason.

Burns is just 24 years old, is still on his rookie deal, and has posted at least 7.5 sacks in each of his first 3 season. He has already racked up 5 sacks this season, just about guaranteeing he’ll reach that mark again and putting him on pace to hit double digits for the first time in his career.

While those picks weren’t enough to pry Burns away from the Panthers, they could be intriguing options for other teams. While the picks the Rams have traded in recent years have all been seen as late-1st rounders, any picks they trade right now could potentially come earlier in the draft.

Right now, the Lions are in position to get a top-15 pick out of last year’s Matthew Stafford trade as they own the Rams’ 2023 1st rounder.

With an aging quarterback, some large escalating contracts, and a few of their less expensive starters heading for free agency, the Rams could have a tough time improving their fortunes next season.

What the future will actually hold for the Rams will become much clearer with any moves they make today.