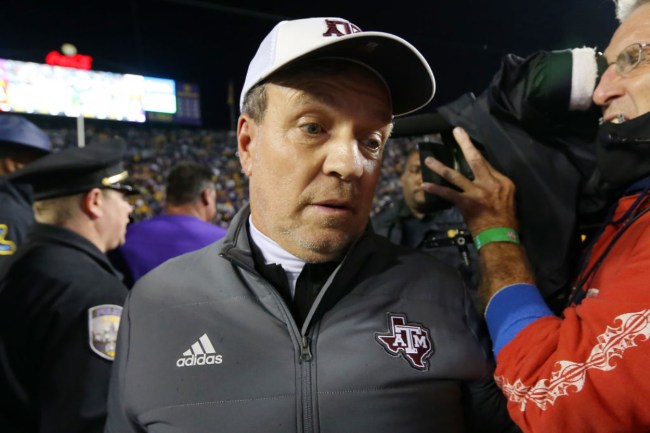 Jimbo Fisher was reportedly toward the top of LSU’s most wanted list when it came to a replacement for Ed Orgeron. Based on the newest report involving Fisher and the Tigers, it’s safe to say Fisher was the guy from the get-go.

Ultimately, LSU hired Brian Kelly, but the Tigers were prepared to offer Fisher an enormous contract.

According to Brett McMurphy, LSU was prepared to offer Fisher an eight-year, $125 million contract in which he would be paid $13 million per year. That $13 million number clearly includes some major incentives as well.

Fisher currently makes just over $9 million per year at Texas A&M after signing his most recent extension in College Station earlier this year.

The Tigers ultimately inked Kelly to a 10-year, $95 million contract with a number of lucrative incentives attached as well. Kelly received a substantial increase in taking the LSU job and leaving Notre Dame.

Many college football fans were shocked at the news that LSU was willing to fork over that sort of money to lure Fisher away from Texas A&M:

How bad did Jimbo not want to go to LSU? https://t.co/6yiUtAlaSM

I’m old enough to remember in September when A&M gave Jimbo a raise to 9 million per year the huge story was how A&M is overpaying for him. https://t.co/0IutM50NT9

So a couple of things here.

Fisher spent six seasons as an offensive coordinator and quarterbacks coach at LSU from 2000-2006. He led the Aggies to just an 8-4 record this season, making him 34-14 overall in four seasons at A&M, which makes it all the more interesting LSU was reportedly ready to offer him such a ginormous contract.