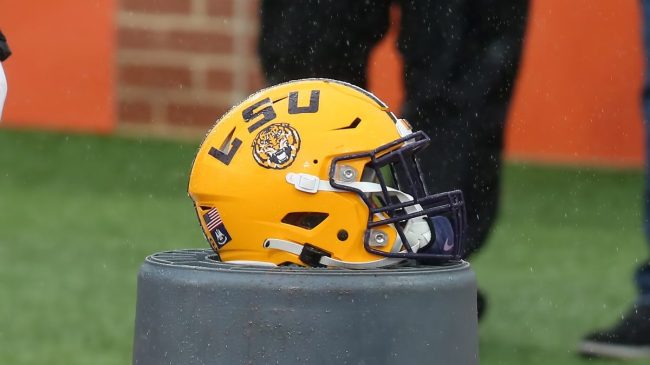 It’s been a roller coaster of a season so far for the LSU Tigers. After getting obliterated by the Tennessee Volunteers, their college football season is completely up in the air. However, one fan isn’t taking Saturday’s loss lightly, as they’ve come up with a bizarre conspiracy theory about the opening kickoff.

Get your tin hats ready because this one is a doozy! So, to begin with, let’s look at the opening kickoff from the game. Tennessee launched it downfield just for the Tigers’ kick returner to totally muff the kick. The Volunteers recover the ball and immediately start the game in scoring distance.

It was a brutal sequence for LSU. Not only did they turn the ball over immediately, but it basically gave Tennessee the ball at the start of the game and halftime.

Annnnd Tennessee recovers the opening kickoff vs. LSU. Tigers special teams this year have been a struggle pic.twitter.com/4PMdAkLyEv

Then, out of nowhere, some fan hit the internet to share what he believes is obvious evidence that Tennessee used an “electrophysio-magnetic pulse” to disrupt the kick returner on the opening kickoff. Apparently, this LSU fan believes the Volunteers used this technology to “scramble sensory electrons and disrupt the brain’s electro currents.” According to this deranged fan, it caused “instantaneous and temporary loss of motor strength and muscle control.”

Well… shit guys, we’ve been caught. Our season is over. pic.twitter.com/PBwnMcIp30

If you lost at “electrophysio-magnetic pulse” then just know we’re right there with you. The best part about this conspiracy theory is the red circle on the image. It doesn’t mean anything at all. The guy could have put that red circle in the stands and it would’ve achieved the same thing.

We know college football fans can get a little nutty, but this one is absolutely insane. Take off the tin hats and go breath some fresh air for a bit.