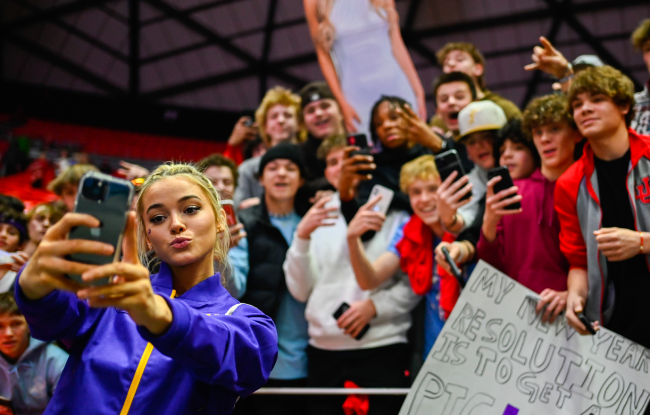 This past Friday, Olivia Dunne and her LSU Gymnastics team participated in their first meet of the year against the University of Utah.

It was a scene.

Things got so out of hand that the LSU team had to move their bus and get a police escort.

LSU had to move its team bus so they didn’t have to run into the group of boys. There were cops stationed in front to avoid them getting in. https://t.co/4mtWkUxAWa

When several people on social media tried to blame Olivia Dunne for somehow causing all of the chaos, her mom Katherine Dunne clapped back.

It is not ok to blame any athlete/celebrity when fan behavior crosses the line. In a sport where all the girls wear nothing but leotards stop suggesting that how Livvy dresses means she deserves this in any way. Stop shaming girls for the behavior of boys. https://t.co/SG728snPRA

“I am a mother of a Utah gymnast, as we were walking to the car the group swarmed my daughter and her teammate,” she said. “They literally said to their faces, you are not Livvy but you will do, can we get a picture. [The group] also called my daughter Livvy 2.0. They were so rude and disrespectful. It was very hard for mama bear not to come out.”

After the meet, Olivia Dunne addressed her rabid fanbase.

“I will always appreciate and love the support from you guys, but if you come to a meet, I want to ask you to please be respectful of the other gymnasts and the gymnastics community as we are just doing our job,” she tweeted.

Following the craziness of their first meet, LSU Gymnastics announced this week they would be beefing up security at their events.

LSU coach Jay Clark told The Advocate/Times-Picayune on Tuesday that a security officer now will travel with the team to competitions for the remainder of the year.

“That person will be in our hotel and outside our locker room and getting us to and from the bus at the venue,” Clark said. “(The officer) will be there to create a perimeter that keeps everybody safe.

“We want to be accessible to our fans with autographs and kids, but we also don’t want to bury our heads in the sand. We want to make sure everybody is safe at all times.”

It’s not unusual for the gymnasts to go into the bleachers and meet their family and friends, but that practice may come to an end.

“Things have to change. We just can’t expose them,” Clark said. “We’re looking at some policy changes that will give parents access at a different location to their daughters.”

He added, “We had an officer with us, and they moved the bus as things got out of control [on Friday]. It was handled well by Utah.

“Probably 99 percent of the people there were seeking autographs, but you never know when you get a crowd like that. We’ll do the best we can to protect them. It’s at the forefront of my mind as a father and coach of these young women. We take very seriously the responsibility to keep them safe.”

Olivia Dunne did not compete in any events.