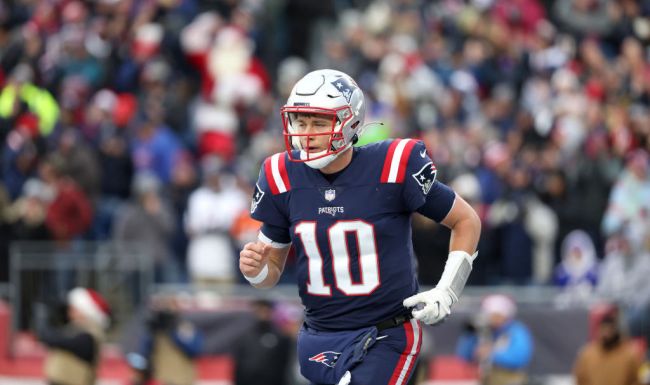 Just about a month ago, the football world was quaking in their boots as it seemed as though the New England Patriots were well and truly #back to their old selves following the departure of Tom Brady. Thanks to a dominating defense, an aggressive run game, and a rookie quarterback coming into his own, NFL fans feared that legendary head coach Bill Belichick had finally righted the ship and, once again, turned the Patriots into the powerhouse of the AFC.

Luckily for fans outside of New England, though, the last three weeks — which has seen the Patriots go 1-2 during that stretch, with their only win coming during that crazy weather-impacted game in Buffalo (Jones attempted just 3 passes) — has suggested otherwise, particularly in regards to the play of rookie QB Mac Jones, who was thoroughly outdueled by Bills signal-caller Josh Allen on Sunday afternoon.

On Sunday, Jones was flat-out awful. He completed 14 of 32 passes (43.8 percent) for 145 yards, with no touchdowns and two interceptions. He averaged a dismal 4.5 yards per attempt and finished with a career-low passer rating of 31.4.

Things have not gone well for Jones over the past three games. In that time, he has combined to complete 42 of 80 passes (52.5 percent) for 463 yards (5.79 yards per attempt), with two touchdowns and four interceptions. That calculates to a passer rating of 57.5, which is horrible. The Patriots have gone 1-2 during that stretch, with the one win coming in that ridiculous snow game at Buffalo. [via The Big Lead]

With the 33-21 loss to the Bills, despite both being 9-6, the Pats ceded inside track to winning the AFC East to Buffalo. The Pats now find themselves as the second Wild Card team, the No. 6 seed in the AFC overall, while the Bills — who currently lead the AFC East — are the conference’s No. 4 seed, trailing the Kansas City Chiefs, Tennessee Titans, and the Cincinnati Bengals.