Patriots Teammate Says Mac Jones Is Good At Getting Yelled At, Which Shouldn’t Be A Surprise To Anyone 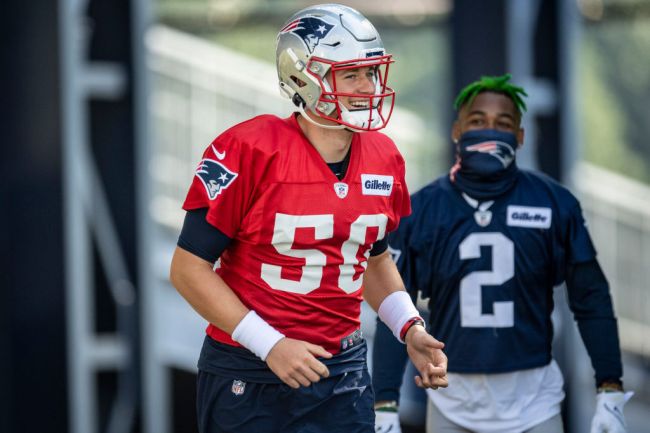 NFL rookies need to possess the ability to take criticism, and that’s especially true if you’re a rookie quarterback for the New England Patriots. Mac Jones apparently possesses that trait, he’s good at getting yelled at and bouncing back on the very next snap.

“He’s a real fast learner,” wide receiver Jakobi Meyers told reporters on Tuesday, according to NBC Sports Boston. “This isn’t an easy offense to just jump into and pick up and play, especially dealing with Josh McDaniels, who expects the best out of you everyday.

“The fact that Mac can go in, get yelled at, bounce back and come back and do the right thing, and not make the same mistakes twice, that’s something that’s really good to be a Patriot and have.”

Jones’ ability to take criticism, very loud criticism, and not let it get to him should surprise no one.

Let’s not forget that Jones played for Alabama where Nick Saban can get in the ear of his players better than anyone in football. Jones is used to getting an ear-full and having to perform on the next snap, whether it be in practice or in the middle of a game.

Jones obviously has hurdles to clear moving from the college games to the professional ranks, as all rookies do, but from a coaching approach standpoint, Jones should feel right at home under Bill Belichick and New England’s staff.

Meyer’s remarks, especially his statement about Jones “not making the same mistake twice” is a big one. For Jones to show his ability to learn and adapt to one of his wide receivers is a big deal.

It may not be long before we see Jones officially earn QB1 ranks in New England.