Mac Jones Already Being Compared To Tom Brady, Which Should Have Cam Newton Very Worried 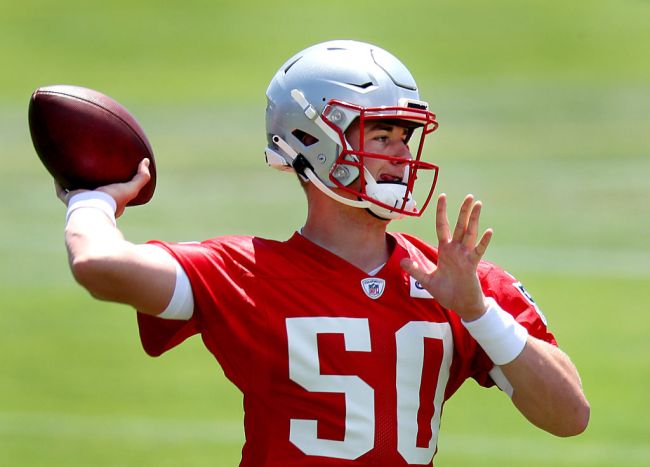 Every quarterback that puts on a New England Patriots jersey from not until the end of time will be compared to Tom Brady. That’s just how it works when you’re essentially trying to fill the shoes of the greatest quarterback to ever do it.

The comparisons to Brady can go one of two ways, they’re either going to be positive or negative, and the early comps to TB12 for Mac Jones have been nothing but positive.

The Alabama standout was consistent during Pats’ minicamp, so ESPN’s Mike Reiss wasted no time in crowning Jones the QB that most resembles Brady in the passing game. At least when it comes to other QB’s that have come thru the Pats’ system over the years.

“When he had it going, the passing game most closely resembled what it had been for the better part of the past two decades from a timing, rhythm and accuracy standpoint,” wrote Reiss.

“And while there were some predictable hiccups along the way — such as a bad interception on the final day that led to visible frustration in which Jones wound up and almost punched the ground — it seems safe to say there isn’t another rookie quarterback over the past 21 years who is as far along as Jones is in the system this fast.”

The same sort of accolades and comparisons were being tossed around during Jimmy Garoppolo’s rookie season in New England. This is an entirely different scenario and team, however. Jones isn’t sharing a QB room with Brady, the only competition he has is Cam Newton, who struggled mightily last season.

Head coach Bill Belichick is still very much in Newton’s corner even after a video went viral of him missing numerous short passes during camp. Nevertheless, Newton is absolutely aware of the buzz growing around Jones and has to know his name isn’t written in stone for the QB1 spot.