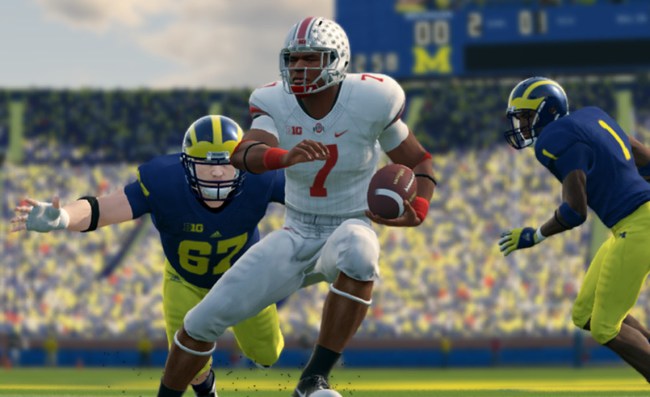 I’m a pretty vocal critic of the NCAA and its enthusiastic willingness to exploit its players at practically every turn, and as a result, I respect anyone who’s willing to take a stand against the organization and fight for what’s right—at least in theory.

In 2009, former UCLA basketball star Ed O’Bannon filed a class-action lawsuit against the NCAA on behalf of college athletes who had their likeness jacked for use in a variety of video games produced by EA Sports—including the legendary NCAA Football franchise.

I don’t even want to know how many hours of my life I devoted to turning one-star schools into national dynasties back when I was in college by obsessively recruiting virtual high schoolers and spamming the triple option and I have to say I was fairly disappointed when the game was discontinued after a judge ruled in O’Bannon’s favor in 2014.

There are some people out there who keep an old Xbox 360 on hand just so they can get their fix, and while others have made an effort to fill the void, you’re largely shit out of luck if you want to play a college football video game.

Thankfully, it looks like our prayers have (kind of) been answered.

Prior to last night’s NFL Draft, EA Sports gave us our first look at Madden 20 and revealed a new game mode called “Face of the Franchise.”

Every season is our season.@PatrickMahomes is the new face of the franchise. #Madden20 @EAMaddenNFL pic.twitter.com/xujLY070XU

Players will have the chance to step into the shoes of a quarterback competing in the College Football Playoff for one of ten schools: Clemson, Florida, Florida State, LSU, Miami, Oklahoma, Oregon, Texas, Texas Tech, and USC.

According to SB Nation, there’s speculation that this could be just the beginning of a bigger initiative to bring college football video games back into the mainstream, so while I wouldn’t hold your breath waiting for a new NCAA Football game, this is certainly a step in the right direction.