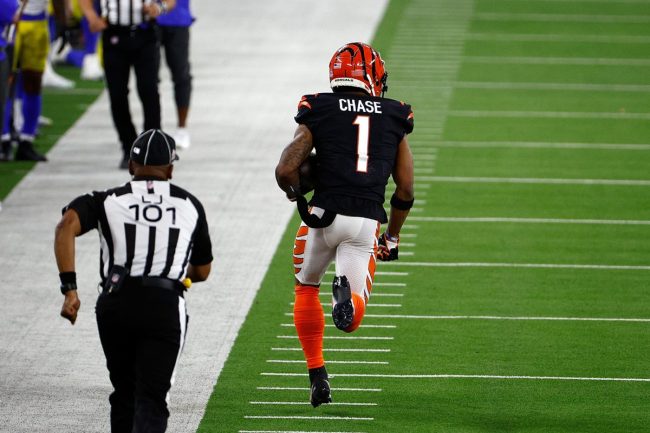 Fans are upset upon seeing the Madden ’23 WR ratings this week. The game’s newest edition is leaking its overall player rankings before the game is ultimately released this August.

On Monday, fans got a chance to see the pass catchers. It’s safe to say that many disagreed with the original ratings. Take a look for yourself.

The top 10 wideouts in the NFL, according to Madden, are as follows.

It’s no surprise to see Adams and Kupp at the top of the list. Adams joins the ’99 Club’ and is widely considered to be the top pass catcher in the game. Kupp is fresh off of a Super Bowl winning season where he led the league in catches, yards, and touchdowns.

Hill, Diggs, Jefferson, and Co. have proven to be worthy of their ratings, but it’s a player that was left off of this leaderboard that has folks upset.

One name that was left off of the board was Ja’Marr Chase, who’s fresh off of a 1,400-yard season and a Super Bowl appearance. Just a rookie, Chase led the Bengals in receiving and was quarterback Joe Burrow’s favorite target. Chase more than doubled the next closest teammate in touchdown receptions, and he averaged an incredible 18 yards per catch.

Some believe that was worthy of a rating higher than Amari Cooper, who’s never tallied a 1,400-yard season and had 865 yards last year with Dallas.

Bruh where tf is Jamarr Chase??

WHY IS CHASE NOT ON HERE

There were actually a few saying that Deebo Samuel should’ve gotten the nod over Cooper, too. Samuel was one of the most dynamic players in the league last year, racking up 1,770 yards from scrimmage. He, like Chase, notched a 1,400-yard season as a receiver while leading the 49ers in both rushing and receiving scores.

Where is Deebo? Disrespect is real.

It appears to be a huge swing and a miss by Madden on the WR ratings.