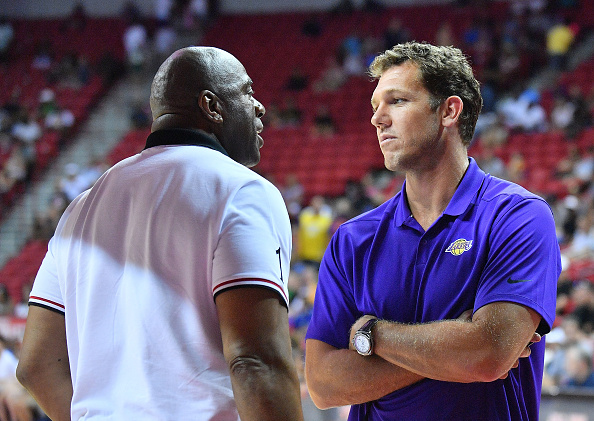 We now have more details in the meeting that took place between Magic Johnson and Luke Walton and it appears that Johnson was a bit more enraged at the Lakers coach than first reported.

Via The LA Times

Johnson, president of basketball operations, shouted and cursed at Walton, according to multiple sources who weren’t authorized to speak publicly. He asked Walton what he was doing with the team, wanting to see an offensive system in place that had yet to be implemented. At one point he chided Walton for interrupting him.

Sources close to Magic said he was stern with Luke Walton during the meeting more about not having a system in place than the wins and losses. Magic wants to see Luke have the Lakers run an offense that he has yet to see. Sources said that maybe the meeting opened Luke’s eyes.

According to the LA Times, Walton’s job isn’t in jeopardy at the moment.

According to multiple people familiar with the situation, Walton’s job is not in jeopardy. Although Johnson is prone to such emotion, he is not prone to making rash business decisions. Walton has also long had the support of Lakers owner Jeanie Buss, and hasn’t lost it as the Lakers go through a rough stretch in the early part of the season.

Magic Johnson was angry in the meeting he had with Luke Walton (first reported by @wojespn and @mcten) but he doesn't make rash decisions. Several sources told me and @BA_Turner that Luke Walton's job is not in danger. Further, ownership still very much believes in him.

During today’s Lakers practice Walton spoke with the media and told them he doesn’t feel like his job is in jeopardy despite of the meeting.

Despite what the Lakers are saying it seems like Walton is on a short leash and he could be in trouble if the Lakers continuing to struggle.