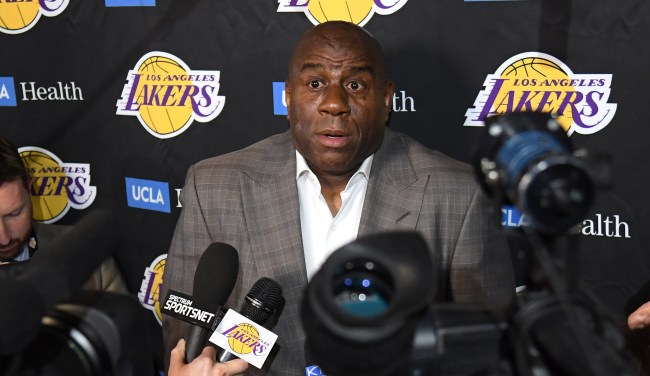 So what was the most surprising thing about Magic Johnson announcing his resignation as President of Basketball Operations for the Los Angeles Lakers?

The fact that his announcement stole much of the night’s focus away from retiring NBA superstars Dirk Nowitzki and Dwyane Wade?

The fact that he told the media about his resignation before telling the team’s coach Luke Walton?

Or the fact that he told the media before he even told his boss Jeannie Buss?

All of those things were about as unexpected as the resignation itself, and for what it’s worth, Buss, at least publicly, didn’t seem too upset with Johnson.

Earvin, I loved working side by side with you. You’ve brought us a long way. We will continue the journey. We love you 💜💛 https://t.co/ofmQl6BtBz

You know what wasn’t unexpected about Magic Johnson’s resignation press conference? The fact that he did something that the internet turned into an A+ meme.

“I been talking to the people walking here, we been talking about next year and I’m sittin’ there sayin’… *shakes head*… I’m not gonna be here. Hahahahaha,” Magic told the assembled media.

That was all it took and people on Twitter were off to the races.

My Job: Do you see yourself working here next year

Magic taking the words right out of Kyrie and KD’s mouth. pic.twitter.com/sAKLFxEpRN

Lebron James : I’m Here For The Long Run We Gonna Get Through This Together !! Go #Lakers #MagicJohnson : pic.twitter.com/8WkQsggoLZ

Magic Johnson deadass treated the Lakers like a retail job 😂😂😂.

When you want quit, but you don't want to put in that two weeks notice pic.twitter.com/pvgtqIAW2b

Russ: Damn that’s crazy we blew a 3-1 lead. We’ll get them next year.
KD: pic.twitter.com/SWLfpQf7Gl

When your boss talks about the company timeline for the next year pic.twitter.com/MWKUYMCW2e

Magic Johnson sounds like a senior on the last day of school pic.twitter.com/Rxvz6pSnQq

So magic says before I go I'm leave y'all with a priceless meme 🤣🤣 pic.twitter.com/QNDPayv9go

Magic Johnson trying to get out of the Lakers Arena. pic.twitter.com/liOD7c4I1a