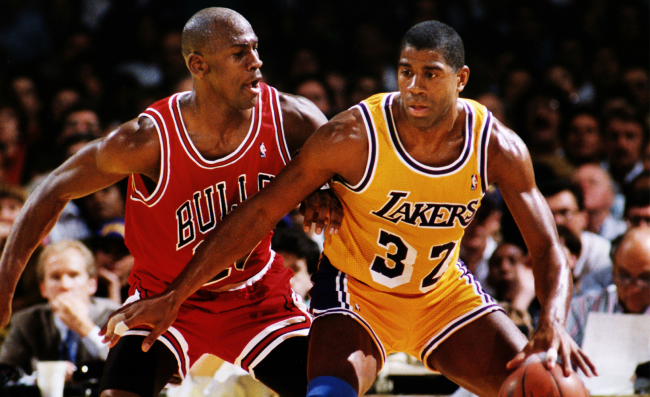 One of the many things that are so interesting about Michael Jordan is that not only was he the GOAT during his Hall of Fame NBA career, the stories surrounding him from his playing days are also arguably the greatest of all time.

One of the more prolific Michael Jordan storytellers is a man who is also one of the greatest of all time and a player who during his time in the NBA helped define a particular era in the league: Magic Johnson.

Magic, who played alongside Jordan on the 1992 Dream Team in Barcelona, recently did an interview with The Bakari Sellers Podcast where he was asked when he knew the Magic/Bird/Pistons era of the NBA had officially become the Jordan Era in the NBA.

“It was easy to see when it hit,” Magic replied with a chuckle. “When we played them in ’91 for the NBA Finals and he came up on the right side and he took off with the tongue out and we all jumped. We thought we had him and in mid-air he switched to the left hand. We said, you know what? Pass another torch!”

“And they beat us 4-1 in that series and when I went in after the game, after they had beat us, I told him, ‘It’s your turn. It’s your time now.’ and sure enough, won three straight, took off for baseball, came back… now who else in the world could take a couple years off, come back, and win three more championships? Nobody but Michael Jordan.”

Johnson was also asked to explain why Isiah Thomas wasn’t on the Dream Team.

He then agreed with Sellers that Thomas being part of the Detroit Pistons Bad Boys crew was also a big factor in why other players didn’t like him.

Also during the interview, Magic talked about how he tried to mentor younger players like Kobe Bryant, Shaquille O’Neal, LeBron James and others who followed in his footsteps to NBA stardom.