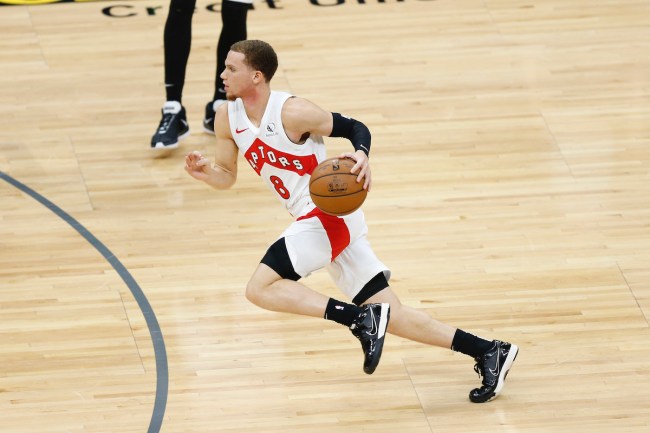 There are overbearing parents in youth sports, and then there’s Malachi Flynn’s dad, who has a son playing in the NBA. While the rookie point guard isn’t getting a ton of run with the Toronto Raptors at the moment — only averaging about nine minutes per game — he’s still just 22 years old and trying to find his way in the league. Oh, but that’s not a good enough reason for Malachi’s dad, because he thinks his son’s being held back by the coaching staff.

Instead of keeping the thoughts to himself, though, Malachi Flynn’s dad did the one thing no parent should do: Complain in public. While that’s a bad strategy for the Karen who takes her son/daughter to a youth soccer league every weekend, it’s even more embarrassing when it’s done by the dad of an NBA player. Take a look below at what Flynn’s dad had to rant about.

I say this not because I am Malachi Flynn dad. Malachi Flynn was number 1 in the country last year in running the pick and Roll. A team that went 26 and 0 end of season 30 and 2 ranked 3RD in the NATION. The stats prove he was the best guard in the country at running the pick and Roll. To not allow him to do that is like telling Patrick Mahomes he can’t pass the football. All I am saying is all those rookie guards you see playing well.

According to the NCAA and all of college basketball Malachi Flynn was more effective. How many first team ALL AMERICANS do you see in the NBA watching the basketball game.

Damn, that’s… something. I totally understand Malachi Flynn’s dad being proud of his son and trying to support him, but let’s pump the brakes here, because the Toronto Raptors’ rookie is averaging 2.2 points and 1.1 assists per game. Even when adjusting those numbers per 36 minutes, they only come out to 9.5 points and 4.6 assists — which aren’t exactly All-Star level.

As for the comparisons to Patrick Mahomes, honestly, it’s absurd. Yes, Malachi was a first-round pick by the Raptors (29th overall), but mentioning him in the same sentence as a league MVP who has won a Super Bowl is just crazy stuff.

Who knows what Toronto’s game plan is when it comes to using Malachi Flynn, but there’s probably a worse chance now that the rookie sees more action after his dad publicly blasted the coaching staff about the guard’s current role. Ask any overbearing parent how that goes and they’ll mostly tell you it fails about 95 percent of the time.