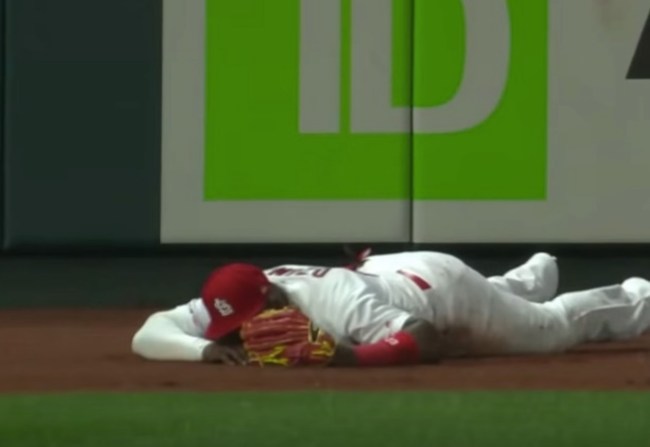 The St. Louis Cardinals dispatched the Los Angeles Dodgers last night 4-0. The Cards put up 1-run in the first, added 2-runs in the third, and the game’s scoring ended with a 4th run in the fifth inning. The Dodgers out-hit the Birds with 7-hits to 6 and both teams had an error on the night.

Marcell Ozuna didn’t account for one of those two errors but GOOD GOD he should’ve been sent off the field wearing a ‘Dunce’ cap for what he did in the 8th inning. The career .277 hitter and 2x All-Star attempted to run up the outfield wall and save a home run. Only, the ball was never traveling that far.

Instead of making some spectacular highlight play he busted ass, fell flat on his face, and committed one of the biggest bloopers we’ll see in 2019. The ate dirt and bruised his ego while everyone looked on in complete disbelief at what just happened.

I’ve set this video from MLB to start right before the highlight but I’ve also included a GIF below that will give you the best angle. I’d suggest watching both so you can really soak up this absolute FAIL.

Missed it by that much. pic.twitter.com/yQs026Axee

"See, what had happened was…" – Marcell Ozuna, probably. pic.twitter.com/1pHXLaeDOq

Ozuna didn’t exactly redeem himself at the plate last night. He was 0-3 with 1BB and he left 4 batters on base throughout the game. Fans on Twitter were already pointing out that this wasn’t the first time Ozuna had made a laughably unbelievable play in the outfield. This was just last season:

I’m conflicted on ripping Ozuna for that play. On the one hand, who the fuck am I to judge his play? He’s a professional athlete who makes millions for the St. Louis Cardinals, a 2x All-Star. And I’m just some guy on the Internet who’s athletic achievements include losing 35-pounds since November and once playing a 4-hole stretch of golf at 3-under. That’s about it for me.

Where do I get off on making fun of this guy for falling flat on his face in the dirt during a horrendous display of baseball? On the other hand, he’s spent his entire damn life playing baseball and he should know better by now. What use is a center fielder without perfect depth perception? How many times are we going to see this blooper from him? Hopefully, many more times because it makes for a great highlight but if I was a Cards fan I wouldn’t be overjoyed by this. At least they won the game, right?

It’s not always a FAIL. He did pull of this home run-robbing play in 2017. Maybe he’s been trying to catch lightning in a bottle ever since: