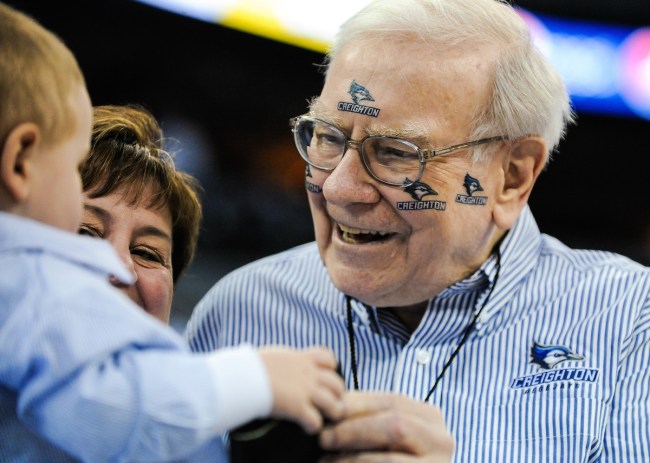 With March Madness tipping off this week, I’ve got a hunch that every single person reading this is filling out multiple brackets, just hoping they can walk away as the big winner once a champion is crowned in a few weeks. The NCAA Tournament is the best time of year to be a sports fan, and bracket challenges only add even more intrigue.

But while most of us just compete with our friends, family and/or coworkers in March Madness pools, there’s been one bracket challenge that has notoriously been known to be the best of the best. That’d be Warren Buffett‘s, who has run his Berkshire Hathaway bracket competition since 2016.

Given the fact that Buffett has a net worth estimated at over $100 billion, you better believe the 90-year-old is more than generous when it comes to dishing out cash to the winner of his company’s bracket challenge. But, contrary to popular belief, the winner doesn’t get $1 million per year for life — as some media outlets have falsely stated. Still, according to Yahoo! Finance, the winning payout isn’t too shabby.

Berkshire, which started the tradition in 2016, will award $100,000 to the employee who picks the winner of the most games correctly before an incorrect guess, the company said Monday in a statement. The prize money is increased to $1 million if an employee picks all first-round games correctly and further upped to an annuity paying $1 million for the rest of that employee’s life if both first-round and second-round games are chosen correctly.

Buffett’s company said a number of employees in past years have correctly picked 31 winners of the initial 32 games.

In other words, if you’re the lucky person at Berkshire Hathaway to choose the most games correctly when filling out your March Madness bracket, you get a cool six-figure payout. If, somehow, an employee of Warren Buffett’s can choose every first-round game correctly, only then does the prize money jump to $1 million — which could be doubled if all second-round games are picked accurately.

Now, look, having health insurance and 30 days off for the year are nice perks from most companies, but they pale in comparison to what Buffett’s Berkshire Hathaway offers here. If nothing else, just submitting a bracket at least brings the chance of winning $100,000. Talk about awesome.

According to NCAA.com, the odds of having a perfect March Madness bracket is about 1 in 9.2 quintillion, so there probably isn’t going to be anyone who pulls that off. If you’re the lucky SOB who does, go ahead and soak up your (presumed) winnings from any of the bracket challenges you enter in. Just know that the payout probably won’t be anything near what Warren Buffett will pay one of his Berkshire Hathaway employees.