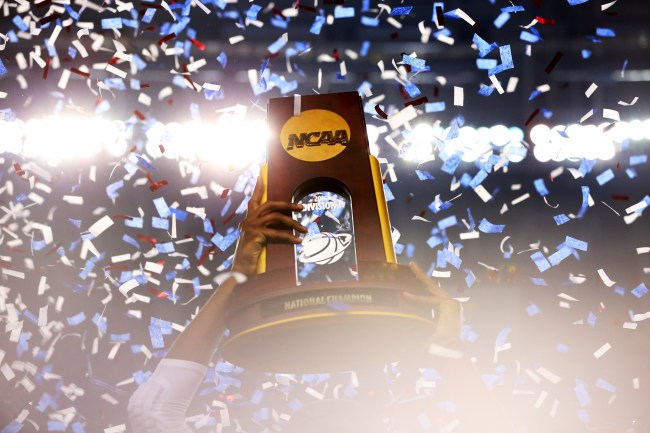 After March Madness was cancelled by the NCAA last week because of the worldwide pandemic going around, every single sports fan has felt deprived from finding out which college hoops team would be crowned national champion in this wild season. Like most years, there was no definitive favorite to win it all, with the NCAA Tournament always giving us moments that bust our brackets and leave us speechless — and this season wouldn’t have been any different.

Unfortunately, because there won’t be a tourney this year — and we’re all locked in our apartments for who knows how long — the next best thing is imagining who may have walked away the winner when all was said and done. While teams like the Florida State Seminoles have staked claim on the title, and the Kansas Jayhawks perceived to have had the best chance at winning it all, the Washington Post decided to try and settle the debate once and for all.

That’s why the Post put together a simulated March Madness bracket, using an in-depth system to try and figure out the 68 participating teams, since brackets weren’t officially released, as well as the outcomes of every single game. Here’s how the publication described its method.

We have a pretty good sense of which teams were likely to make the field thanks to the Bracket Matrix, which compiles data from 81 different bracketologists, and roughly where each one should be seeded according to Patrick Stevens’ last bracket projection before cancellation. All that’s left is to simulate the What-Might-Have-Been 2020 Bracket.

To make it simple, we’re going to start with an estimated number of possessions for each team using the definition outlined by Nylon Calculus, including any additional possessions to be had via offensive rebounds and turnovers. Then, estimated scores are derived by multiplying those respective possessions by the team’s adjusted offensive rating found at Ken Pomeroy’s site. Once we know the projected scoring margin, we can infer an implied win percentage.

To simulate luck in this tournament, we are going to compare each team’s expected win rate in a head-to-head matchup to the expected win rate if we based its chances on seed matchup alone. Any team that had a win rate higher than expected for a seed pairing was given a chance at the upset victory. That individual game was then simulated 5,000 times, with the result from the 2,020th game used for this bracket.

Now that you have some understanding of how the Washington Post determined the simulations for its fake March Madness tournament, let’s just fast-forward to the good part: The Final Four.

According to all those simulations, here’s what the results showed, along with the winner of the entire NCAA Tournament based off of the data the Post found.

So, for all you Ohio State haters out there, the simulated March Madness bracket from the Washington Post probably doesn’t make you too thrilled. Obviously, this isn’t real life, but, still, that doesn’t mean tOSU fans aren’t already gloating on social media about their “national championship” from this year’s tourney.

Ohio State easily taking care of Dayton in the final four, with an easy win over Baylor in the national title. I see nothing fictional about this. Ohio state 2020 national champs https://t.co/KEFO6EGQnp

I believe the analysis here is accurate and the logic is sound, so therefore, THE Ohio State Buckeyes are your 2020 National Champs 😎 https://t.co/Dx4hH39Vuy

I believe the analysis here is accurate and the logic is sound, so therefore, THE Ohio State Buckeyes are your 2020 National Champs 😎 https://t.co/Dx4hH39Vuy

Make of this what you want to, but something tells me Ohio State fans will be celebrating the simulated proclamation for the next 12 months until next year’s tournament. So get ready for the continued boasting from the scarlet and gray, guys.