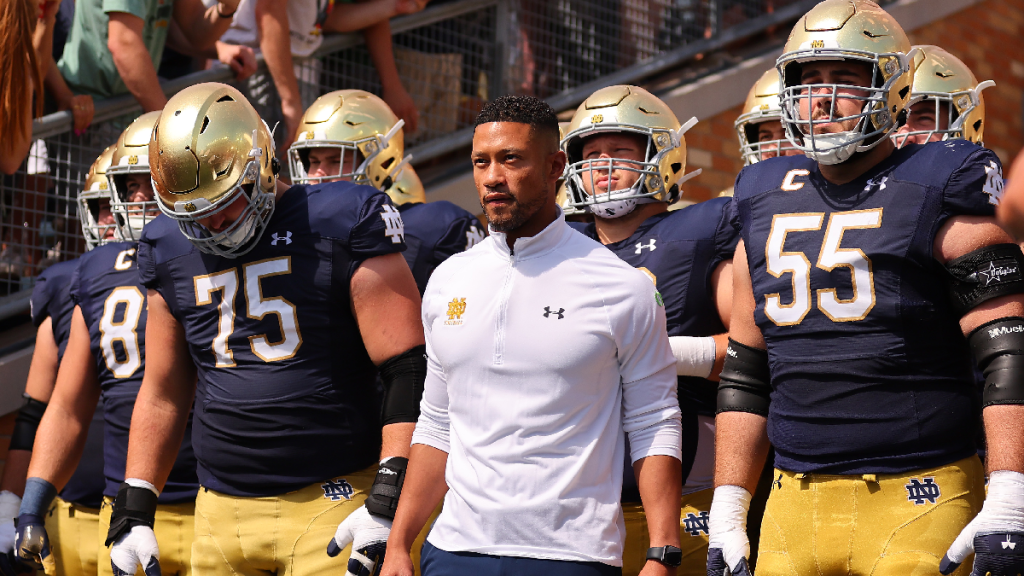 The Fighting Irish of Notre Dame is off to one of the program’s worst starts in the modern era. After leading Ohio State at the half 10-7 in Week 1, the Fighting Irish gave up 14 unanswered points to OSU and lost 21-10. Then they fell 26-21 to the Marshall Thundering Herd in Week 2 at home, a game that was supposed to be an easy layup win for new head coach Marcus Freeman.

While Notre Dame is off to a dismal 0-2 start to the season, head coach Marcus Freeman is feeling the stress because he’s actually 0-3 at the helm of Notre Dame. Marcus took over the Fighting Irish on December 3, 2021, when Brian Kelly jumped ship for the LSU Tigers.

Marcus Freeman only coached the Fighting Irish in one game after Brian Kelly left and that was a 37-35 loss to Oklahoma State in the Fiesta Bowl. Suffice it to say, ND’s Freeman is definitely feeling the weight of his winless start as head coach.

Now, head coach Marcus Freeman and the Fighting Irish might have found the divine intervention they need in order to turn around their 0-2 start to the season and 0-3 start to his tenure: he has OFFICIALLY converted to Catholicism.

According to Grayson Weir at Outkick, Marcus Freeman’s wife and six children are all already Catholic and while he’s always been a man of Christ, he wasn’t Catholic until now.

Head coach Marcus Freeman and his 0-2 Fighting Irish of Notre Dame are in need of divine intervention to turn this season around. Facing the Ohio State Buckeyes in Week 1 was always going to be a brutal way to start the season but losing to Marshall put the program into free fall.

The Catholic connection to Notre Dame.

The University of Notre Dame is arguably the most famous private Catholic university in the United States and is synonymous with Catholicism. Campus has the famous Golden Dome and World of Life mural (aka ‘Touchdown Jesus). And while having religious affiliate isn’t compulsory for admission, 93% of Notre Dame students do identify as Christian.

There are an astounding 57 chapels on the Notre Dame campus. FIFTY SEVEN. And Catholic Mass is celebrated over 100 times per week every single week at Notre Dame.

‘Catholics’ has seeped into every aspect of the Notre Dame football tradition including the famous ‘Catholics vs Convicts’ rivalry:

I’d also encourage you to watch this 1993 intro for #1 ranked FSU versus #2 ranked Notre Dame, arguably the greatest intro in College Football history:

Any guesses on how many wins the Fighting Irish of Notre Dame will finish the season with? Will head coach Marcus Freeman be able to secure a signature ‘W’ this year?