After Just 32 Games, Mark Sanchez Thinks Sam Darnold Should Move On From The Jets 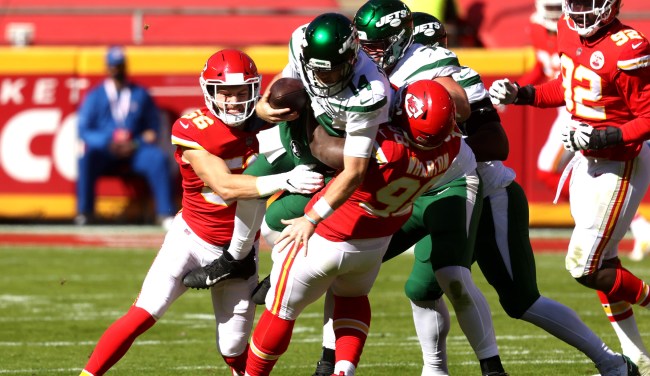 I have joked about it before, but the New York Jets really are the new Browns, aren’t they? For awhile there it looked like the Redskins Washington Football Team was going to take that title (and they still may), and the Lions are always going to Lion, apparently, but the New York Jets have just been going so hard at being the worst, most dysfunctional professional football team in the NFL I think it’s now official. They’re the new Browns. Props to them.

Which is why former New York Jets quarterback and onetime face of the franchise Mark Sanchez thinks it’s probably time for quarterback Sam Darnold to start thinking about moving on to a different team.

Sanchez, who was drafted fifth overall by the Jets out of USC in the 2009 NFL Draft, is quite familiar with the situation current Jets face of the franchise, Darnold – the third overall pick in the 2018 NFL Draft – is going through.

Darnold, who also played his college ball at USC, has only started 32 NFL games so far and it hasn’t been going well. The Jets are 11-21 in those 32 starts, he has been sacked a total of 82 times, and yet he’s still keeping his head above water throwing 39 TD passes and 34 interceptions.

With the Jets looking at possibly drafting another quarterback should Trevor Lawrence decide he wants to subject himself to playing for New York (which he may not), Sanchez tells the Gang’s All Here podcast, “Part of it is that there’s just nothing working in their favor right now, right? It’s not a real veteran group, it’s not guys who played together for a long time and there isn’t just a star-studded cast that can figure it out or just use their talent and make plays. So it’s really the triple-threat in the wrong direction.”

The Jets are a “triple-threat in the wrong direction.” That should be the team’s new slogan.

“There’s just so much uncertainty that it’s almost impossible for a quarterback to have success with all those circumstances. I feel for him,” Sanchez added.

Darnold, who will out this week with a shoulder injury with his ELITE backup Joe Flacco getting the start, still has one more year left on his rookie deal with the Jets.

“Because of the way things have transpired, he’s got to make some serious decisions about the longevity of his career and whether or not playing the rest of this year is even worth it,” said Sanchez. “If it’s in his best interest. If this season is at a loss, which it looks like already. It’s not like they’re going to turn around and make a playoff run. Now you get into these tough decisions as a competitor thinking, ‘Man, maybe my time’s up here and that’s okay. Maybe it’s best for both sides to move on.’”

It will certainly be very interesting to see, should Darnold and the Jets part ways, how the 23-year-old quarterback fares playing for a football team that actually might have a chance to be… good.