Bill Belichick Takes Another Steaming Deuce Down The Jets’ Throat, Says Resigning Is One Of “Greatest” Career Moments 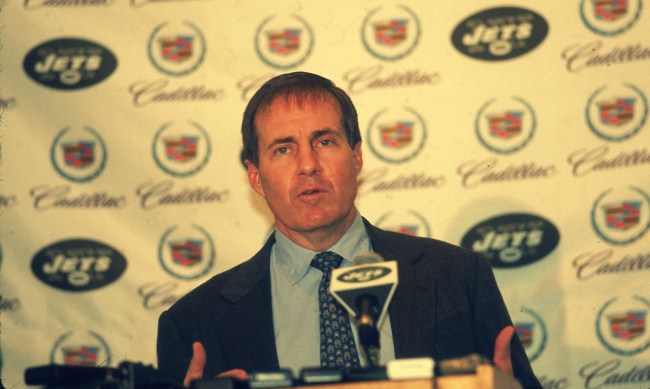 Well, uhhhh, okay then Bill, screw you too. I used to be one to credit you with the lion’s share of responsibility when it came to the New England Patriots dynasty, but given the way this season has been shaking out thus far (y’all almost lost to the 0-8 Jets!), I’m thinking about doing the unthinkable and giving the credit to human Ken doll Tom Brady.

Ole Cheatin’ Billy B obviously isn’t feeling so great about this season either. In an effort to cope with his team’s failures, he recently time-traveled his consciousness to better times, specifically when he resigned as head coach of the New York Jets (Belichick famously wrote on a napkin “I resign as HC of the NYJ” and then left town). As a result, Belichick, one again, took another unnecessary steaming deuce down the throat of the Jets organization and their fans.

Belichick joined WEEI-FM’s Ordway, Merloni & Fauria on Tuesday to discuss a variety of topics, and the story of the day he resigned as the head coach of the Jets came up.

“Well, not only one of the most defining, but you know, one of the great moments of my career. That combined with Robert [Kraft] giving me the opportunity to come here, I couldn’t have asked for anything more. That wasn’t a good situation for me and I didn’t want to be part of it, so I wasn’t. The other half of that was Robert giving me the opportunity to come here and trading, he gave up quite a bit to get me to come here, and that was a big trade. I am very thankful that it worked out. I appreciate all the support from Robert, the Kraft family, the Patriots organization and all the New England fans and I’ll keep trying to do my best for this team and this organization — give them the very best that can and I very thankful for the opportunity to come here. I just wasn’t going to stay there in that situation.” [via FanSided]

Given the way Belichick’s career ascended after leaving the Jets, it should come as no surprise that he remembers bolting from one of the NFL’s worst organizations so fondly. But damn, Bill, have some compassion: Jets fans are already down, there’s no reason to continue to kick us.