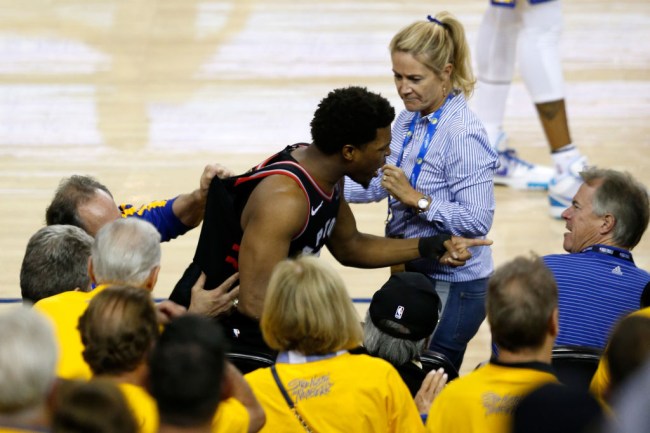 It would be unfair to suggest anyone sitting courtside at an NBA Finals game is a rich, entitled asshole but I think that’s a fair way to describe Mark Stevens, the Warriors minority owner who decided it would be a good idea to shove Kyle Lowry after he dove into the stands in pursuit of a loose ball.

It takes a lot to make Drake look like a reasonable and rational fan—especially after the Nick Nurse incident—but Stevens might have been able to do exactly that on Wednesday night.

No one was really sure who Stevens was when the incident occurred but it didn’t take long for it to come to light that he’s a venture capitalist with a net worth of $2.3 billion, which is about to take a very, very tiny hit thanks to the punishment the Warriors handed out.

Golden State and the NBA announced that Warriors investor Mark Stevens has been banned for a year and fined $500,000 for pushing and directing obscene language at Kyle Lowry in Game 3. pic.twitter.com/tAGDN5yire

A number of players—including LeBron James—implored officials to take some action after the incident and it appears that there might be more bad news in store for Stevens based on reports he could be forced to sell his shares in the team.

🏀 Multiple sources close to the Golden State Warriors tell me Mark Stevens, the minority owner who pushed Kyle Lowry, will likely be forced to sell his shares before the start of next season … #NBAFinals #KyleLowry

That is bad news, right? Welp, maybe not as bad as you think.

Shortly after Byers reported the rumors, Darren Rovell did his thing and let everyone know that Stevens will probably be making a fairly tidy sum if he’s forced to sell his stake in the Warriors, as he’d be looking at a 437.5% return on his initial investment (assuming I didn’t screw that math up, which I admit is entirely possible).

If Warriors minority owner Mark Stevens is eventually forced to sell his undisclosed stake, he’ll get around 4.5 times what he paid for it in the summer of 2013. A source told me he bought in at a valuation of $800M. Forbes has them at $3.5B now.

Rich People Problems are the best problems to have.