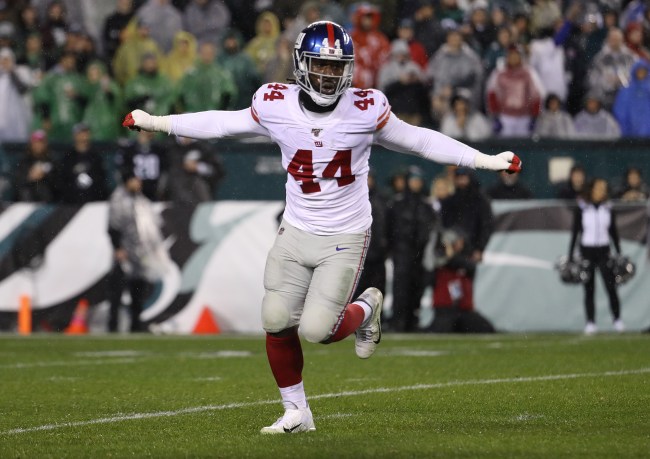 Markus Golden is having a pretty memorable first season with the New York Giants. While the G-Men have sucked (again) this year — and are headed for a top-10 pick in the 2020 NFL Draft — the fifth-year linebacker is enjoying one of his best seasons in the league, racking up 10 sacks in 15 games. This comes after signing a one-year contract worth $2.25 million in guarantees to join New York from the Arizona Cardinals, with the potential of his deal increasing based off of incentives.

Well, after hitting those double digit sacks in Week 16 in a game against the Washington Redskins, Markus Golden has nailed that performance bonus, and the Giants now owe him a cool $1 million for doing so. But it was the way that Golden reached that 10-sack plateau that is really cool — because it required a stat adjustment from the league after reviewing a play against the Redskins. Confused? Take a look at the explanation below.

Golden received the early Christmas gift Tuesday when he was informed that a half sack of Dwayne Haskins early in the third quarter was being changed to a full sack. Golden raced around the left edge on the play and brought down Haskins, whose ankle was being held by linebacker Lorenzo Carter. The Giants teammates originally shared the sack.

But after further review — which happens on a weekly basis with certain disputed plays — a correction was made. Golden was credited with the full sack. It gave him 10 this season and triggered the lucrative incentive.

Well, that’s a pretty awesome holiday present, don’t you think? When told about the stat correction and $1 million bonus, Markus Golden played things much cooler than you or I would.

“I earned it,” said Golden, who has been among the team’s best and most consistent players this season.

“It’s always a goal to get double-digit sacks,” he said. “If you’re rushing the passer, you want to get there. It’s a status thing — 9.5 is a big difference than 10. It feels good to get it down, get it over with and, like I said, be able to put it out for my kids to be able to keep playing, keep fighting.”

Golden was a second-round pick by the Cardinals in 2015 and immediately proved he was a force of nature, registering 16.5 sacks in his first two seasons. Unfortunately, he hit some injuries after that, and his Giants contract this offseason was a “prove it” deal, where he could show that he still had the skills he displayed early on in his career.

While Markus Golden getting $1 million extra doesn’t impact my bank account at all, it’s dope for him — especially after seeing the way it happened to him with the whole stat adjustment thing. Here’s to hoping he rewards himself a little bit for the hard work he’s put in this season.