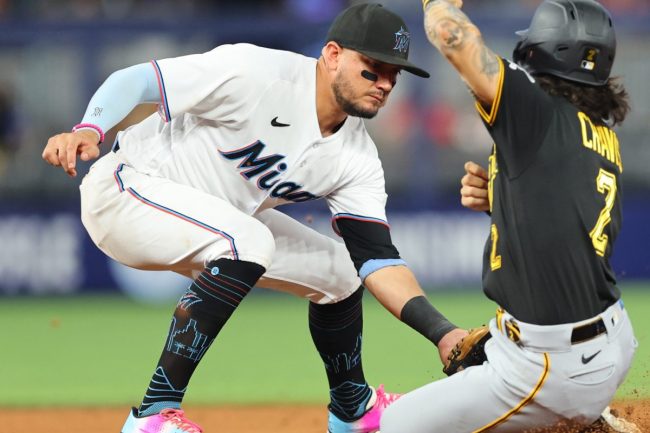 A Marlins player lost a tooth in Miami’s Thursday afternoon matchup against the Pirates. Shortstop Miguel Rojas was forced to leave the game after being hit in the mouth by a helmet.

Pittsburgh baserunner Oneil Cruz was attempting to steal second base in what wound up being a bang-bang play. The ball got to Rojas as Cruz was sliding in. At the exact time that the shortstop placed the tag, the base stealer hit the bag and popped up from his slide.

The result was a head-to-head collision.

Cruz is not a small human being, standing tall at 6-foot-7. He popped back up to his feet with some force while Rojas crouched above him.

Miggy Ro gets popped by Oniel Cruz's helmet and has to leave the game. pic.twitter.com/3LWyvlOTnd

You can see Rojas’s tooth floating through the air as he winces in pain. The defender immediately turns and trots to the dugout. He would not return.

Fans were quick to react on social media once they noticed Rojas’s lost tooth on.

Fans on Twitter were quick to note Rojas’s lost tooth. Many were in disbelief upon seeing the original clip. Take a look.

After taking a closer look, it looks like #Marlins SS Miguel Rojas lost a tooth on this particular play. https://t.co/6LlAN30Hiz

It might be after 3pm but for MiggyRo it’s currently tooth hurty https://t.co/chrDGn9Q9W

Wait, can you see Miguel Rojas' tooth fly out after it was hit by Oneil Cruz's helmet?

If there’s any consolation prize for Rojas and the Marlins, Oneil Cruz was ruled out on his steal attempt. Miami also won the game in walk-off fashion with a timely base hit in the bottom of the 11th inning. It was the team’s second straight extra inning win over the Pirates giving them a much-needed series victory.